One of my colleagues was organizing a meeting in San Diego, and she asked me for suggestions as to where to hold it.  The places she was considering included the Westin Gaslamp Quarter, the Omni, and the Andaz.  I’ve stayed at the Westin before and its fine, but I encouraged her to look at the Andaz. I didn’t hear anything for a while, but I was pleased when the meeting was eventually scheduled for the Andaz San Diego.

The Andaz in West Hollywood is the only other Andaz property where I’ve stayed, so I was happy to try another of Hyatt’s version of their cool ‘luxury boutique’ brand.  Currently there are only 6 properties branded Andaz in the world, but there are several more opening soon.  Also, Hyatt has acquired the Avia brand which they are converting to Andaz which will add a few more.  Since my stay was 3 nights, I used one of my Hyatt Diamond Suite Upgrades.  I received a nice upgrade, but there was no stripper pole in the room.

Once I arrived in San Diego, it was a quick cab ride to the Andaz.  The check in experience is unique, in that although there is a desk, the agents seem to prefer to walk up to you before you get there and use a tablet to complete check in.  I was arriving in the late afternoon, and was offered a glass of wine.  The lobby has free coffee all the time and complimentary wine in the evenings.

I was informed that I was upgraded to an “Extra Large Loft” due to my Diamond status.  I guess the agent didn’t have visibility that I had used a Diamond Suite Upgrade.  This room type is the typical upgrade with using a certificate, although some Diamonds report upgrades without burning a certificate.  I was also informed that breakfast was complimentary, either in one of the restaurants or via room service.  I could order anything, and it would be taken off my bill. Finally, soft drinks in the minibar and food items in the ‘basket’ were complimentary. 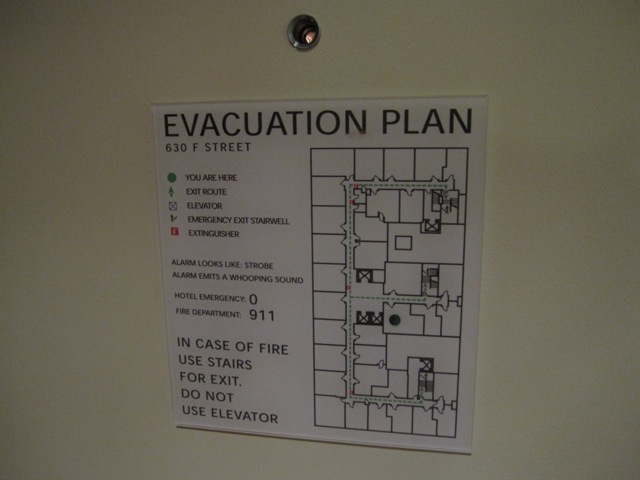 With that, I finally headed up to my room.  The room was nice, but despite the name, I wouldn’t really call it extra large or much of a suite.  Standard rooms in the hotel are small, about 315 square feet, so this upgraded room was more than double that. TV opposite the bed.  There was another TV behind that wall, facing the sitting room. The free Andaz mini-bar.  The items on lower shelf are complimentary 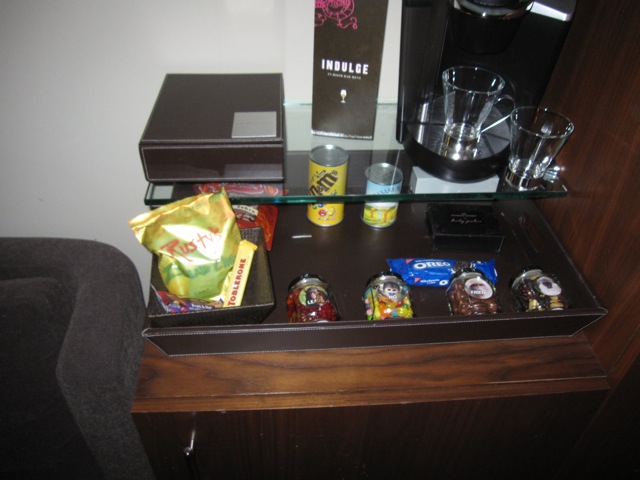 Complimentary items include a selection of coffee/tea and the basket on the left.

The bathroom was quite modern, although other than the shower, kind of small.  Apparently some of the other rooms had a glass wall separating the bathroom from the bed.  May be a bit awkward depending on whom you are sharing a room with. The shower was nice and spacious, but a better shower head would be appreciated.

For all of the hotel stays I do in a year, I very rarely use room service.  I have a hard time justifying the 20+% service charge on top of already inflated prices.  Since room service was included in the free breakfast thanks to my diamond status, I was excited to try it out.  I actually had organized meals each day, so I didn’t really take advantage of this benefit, but I did get some tasty food each day. I also enjoyed the fact that their room service is available 24 hours a day.  On the day of my departure, I was able to get a quick bite before I checked out and headed to the airport.  I’ve seen far too many properties who offer free breakfast, but not until something like 6am.  That doesn’t work in the case of early morning flights. (I’m looking at you Hyatt DFW!)

Another nice benefit of Hyatt Diamond status is turn down service.  I discovered this after returning to my room in the evenings.  The bedding was turned down, and a bottle of water and a note card placed on the nightstand. There is a decent fitness center on the top floor, not too far from the outdoor pool, pictured above.  Given the typically nice San Diego weather, I enjoyed the proximity of the hotel to the bay, and went for runs along the harbor rather than using the gym.

Given my relatively full itinerary during my stay, I didn’t spend that much time in the room other than to sleep.  The location of the Andaz is convenient in the Gaslamp Quarter of San Diego.  One evening we went to a Padres game, just a few blocks away.

The Andaz has a rooftop bar where breakfast is served daily, and it is a bar at night.  During weekends, this bar becomes a popular and according to reports a loud nightclub.  My stay was early in the week, so I did not experience this.  The hotel does offer some excellent specials for their restaurants during mid week.  Shortly after arrival, I met a coworker in the wine bar where we were offered $5 drinks and half off all bar food.  The wine bar is behind the lobby on the ground floor.  There is a sushi restaurant also on the main floor.  The rooftop is open for breakfast, then a bar opens up in the evenings.

Another night after dinner in the Gaslamp, a group of people decided to go to the rooftop bar.  Since the nightclub was not operating, it was nice and low key.  There are various fire pits a and seating areas.  One very large fire pit was quite intriguing. This is a large circular pit filled with stones, and the flames move around the surface.  It was pretty fun to watch while having a drink.  It can get cold with the breeze on the roof, so this was a popular spot.

I quite enjoyed my stay at the Andaz San Diego.  I’m happy with my experiences with the Andaz brand, and look forward to more opportunities to stay at these elsewhere.  I’d recommend this particular property for anyone who is staying in San Diego.