Last month, Brad posted about the launch of the Flighty app, a new flight tracking tool.  Aimed at fans of the defunct Flight Track Pro, Flighty promises “the ultimate flight tracker with pilot-level data, the smartest fastest notifications, and clean refreshing design.”  So I decided to put it to the test on my recent trip to Japan.  For the most part, I found it really helpful, with a few areas for improvement.


Disclosure: I am a Flighty beta tester, and receive otherwise paid Flighty Pro features for free.  Flighty did not otherwise compensate me for this review, or offer compensation for referrals.  All opinions expressed are solely mine.

For those who remember Flight Track Pro, the interface feels relatively similar.  To begin, type in a city pair or flight number, then select a date.  You can choose today, tomorrow, date of your next flight, or pick from the calendar. The display then shows all nonstop options between the city pair on that date.  You can then filter by airline, and hide codeshares if desired. Just click on your flight to add it to your profile.  Once you do that, all added flights appear on a single display screen. You can also click on any flight for the flight’s routing, along with your plane’s tail number and filed cruising speed.  It also displays various contact info for the airlines if you need it. Anyway, with that quick tutorial out of the way, let’s take a look at the pluses and minuses of the new Flighty app. Other tools, including airline apps, offer incoming flight info.  But Flighty takes it to another level, showing 25 hours’ worth of incoming flight data.  In this case, I could track my all the way from Los Angeles the morning before.  That really helps spot potential problems early. The Flighty app offers a variety of push notifications; I activated all of them for this test.  The notifications begin when it’s time for check-in.  Flighty’s notification came in at the same time as Delta’s.  Additionally, the push notification provides the website of the airline.  One thing to watch for – the time shown displays in local time at the point of departure, not where you are currently. Meanwhile, once you’ve checked in, Flighty provides a wide variety of notifications.  These include weather at the destination, incoming flight arrival info, gate assignment, baggage claim info, airport delays, and more.  Perhaps the most useful are the notifications of your inbound plane once it’s on its final leg.  In this case, while still in Tokyo, I could monitor the creeping delay on the plane to take me from LA back to Dallas.  Also, the app warns you if your connecting flights depart out of different terminals; it’s hard to see, but at the bottom of the second screenshot. (If the notifications become bothersome, you can choose which ones you want.)  I found the various notifications quite accurate; delay notifications matched those put out by the airline, and gate/baggage claim data was always correct. 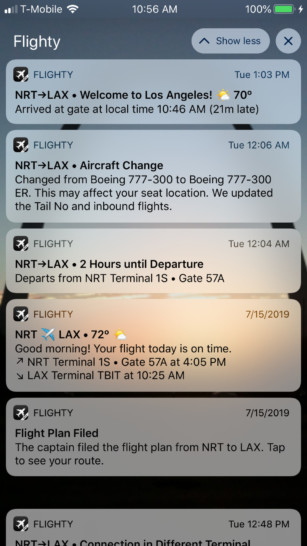 Also worth noting, once the captain files a flight plan, you can see your full, actual route.  While enroute, you can also see how your actual route compares to the filed one. This functionality went live in an update after my trip, but Flighty also offers a somewhat useful “alternate flights” tool.  For example, if you have a morning flight from Dallas to Tulsa, Flighty lets you see all other flights that day at the push of a button. While somewhat helpful, this does have a couple of limitations.  First, the flight you’re booked on also shows up in the list.  Second, the list is limited to nonstop flights between the city pair.  Therefore, you can’t search for connecting flights – a significant limitation, though admittedly a difficult one to remedy.  I imagine a display from Dallas to Los Angeles, for example, becomes unusably large if you add all connecting possibilities.

While I did find the app quite useful overall, I did note a few areas for improvement.

As useful as the incoming flight display is, it unfortunately doesn’t always work for non-US carriers.  I flew three foreign carriers on this trip: Korean Air, Asiana, and ANA.  Both the Korean Air and ANA incoming flight data eventually populated, but only a few hours prior to departure.  Asiana failed to populate at all.  In talking to Ryan Jones, one of Flighty’s creators, he indicated it is a data source (or lack thereof) problem.  So, probably not fixable, but a bummer nonetheless.

But when I search FlightAware, I can trace (when I wrote this the night before) the plane all the way back to Nashville.  I’m not sure exactly what the limitation is.  But if you fly Southwest frequently, beware that the incoming flight data might not work.

In other words, in order to access detailed information about a flight, you must add it to your profile.  If you don’t actually plan to fly it, you then have to delete it.  This is inconvenient, especially since I sometimes use the delay forecast when deciding to book a flight.  I offered the suggestion of a “left swipe/add or view” button, so perhaps that makes it into a future release.

No Automatic Notification of Long-Range Schedule Changes (Possibly a Bug)

I often plan and book trips several months in advance.  Unfortunately, this puts me at the mercy of airline schedule changes.  As an example, we booked a Southwest flight from San Jose to Dallas next January 2nd.  Originally Flight 1942 at 2:35 pm, the airline changed the flight number to 142, and the departure time to 11:55 am.  Southwest actually tried to rebook us on a no plane change option via Burbank departing half an hour later.  But I wanted the earlier nonstop instead.  Now, I obviously don’t expect any app to know how I rebooked.  But there is a flaw in Flighty – the original, now nonexistent flight remains in your profile. If you run a new search, you can’t select the now removed flight, though.  So the app does know the flight dropped off the schedule. I wish there was some kind of notification on the now nonexistent flight that it, well, doesn’t exist.  Maybe a “we’re sorry, but we cannot locate this flight in the schedule” type of notice?  I also offered this suggestion as part of my beta testing. so perhaps Flighty also adds this later on. (Ryan later got back to me and said this might just be a bug, as the system should catch these.)

As a committed iPhone user, this doesn’t affect me.  But if you prefer Android, you’re out of luck.  Flighty currently works only with Apple products.

Including and in addition to those noted above, the Flighty app contains many other features (from the press kit):

Final Thoughts and the Value Proposition

Overall, I really like Flighty.  It captures many of the things I loved about Flight Track Pro, and adds some nice extras like 25-hour inbound flight tracking.  So is it worth it?  Pricing runs $8.99 a month or $49.99 a year.  Or, you can use the free version, which includes only basic flight tracking and past flight history.  That’s pretty steep, and a lot more than other products like “App in the Air”, though I find Flighty’s actual flight tracking tools more robust.

For me personally, as someone who flies in “bursts” every 3-4 months, the monthly option makes some sense.  Three times per year for $27 feels like a decent price.  I go back and forth on whether the $50 annual subscription might make sense.  The push notifications and enhanced inbound flight data really do add value.  What I really wish they had was a “lifetime” option at around that price point; I’d pay that in a heartbeat.  But regardless, if you yearn for a Flight Track Pro replacement, this is a really good one.