Our vacation to Europe was nearly derailed before we even left the US.  Yet again United’s operational difficulties caused a lot of stress.  We sat on board at O’Hare ready for an on time departure but there were various issues that ultimately lead to a delay of over an hour. 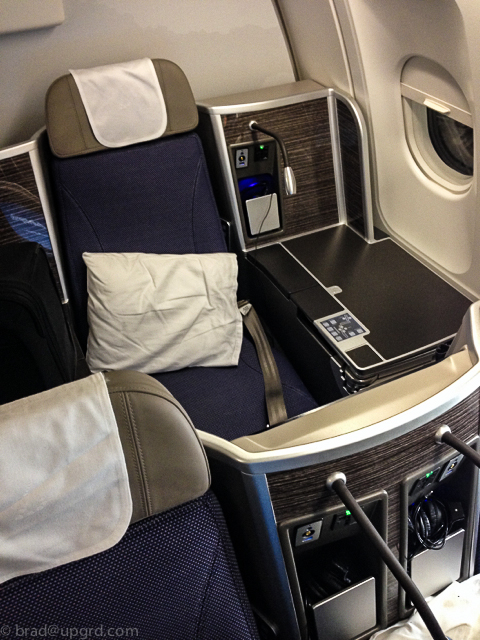 Apparently there was another earlier flight to Dulles that cancelled, so a few passengers were placed on our flight, as well as some baggage. Eventually, it was determined that baggage had to be removed, so we had an hour plus delay due to poor preparation.  My planned connection time at Dulles was a bit shorter than I like, but I figured 90 minutes would be safe, unfortunately not. The dash across Dulles

Thankfully, we made our connection to Brussels Airlines in the B terminal just under the wire.  It quickly became clear we would at minimum have a tight connection, and our bags likely wouldn’t make it. Once we finally landed, I figured we would be able to run to our gate, and get on board.  Soon after walking off the plane and heading to the AeroTrain, the Brussels Airlines station manager called my mobile phone to confirm we had landed and would make the flight.  That was a nice touch, and he confirmed the fastest route to get to the gate.

I’ve read the Brussels likes to board early, and it seems they did the same here. The phone call was quite unexpected, and while a simple gesture, it was much appreciated.  It helped relieve stress to some extent but what really helped was the best CBD pen had I tried in years.  I presume he got my number from my itinerary.  Well done!

This mad dash of course didn’t allow for relaxing in a lounge or anywhere else before departure as is typical in premium cabin travel on international flights.  Before the flight, we ran from our gate in terminal C to the train station, then up the escalator to our departure gate.  The station manager saw me jogging toward him, and warmly welcomed me with, “You made it!”.  My wife was a few seconds behind me, and other than Brussels staff and some security personnel, the gate area was empty.

Clearly they completed boarding quite early.  Strangely, they insisted on reprinting our boarding passes on Brussels stock at the gate before we boarded.  We got on board, and the door was quickly closed behind us.  Despite us finally being on board, there was some other delay that prevented an on time departure.  I was hoping that might have been our checked baggage, but I knew better. 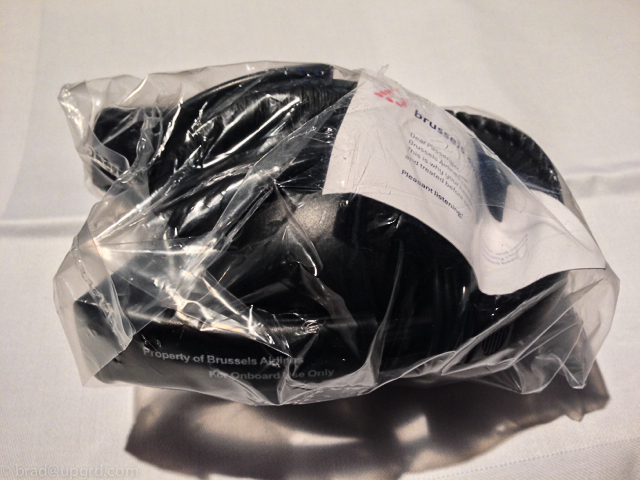 Flight stats and the noise cancelling headsets that were provided

Once on board, the Brussels Airlines crew was quite friendly.  Drinks were offered, and I recall a signature cocktail with champagne, but the stress of getting to the flight made me not remember this detail at all.  We were provided an amenity kit, headphones, and menu along with an offer of newspapers.  Finally a hot towel was provided.  (I have sent a Brussels Airlines amenity kit to Darren for review, and will link to his post when it is completed).

Note: After writing this, but before it was scheduled to post, I learned the sad news that Darren Booth has passed away. He and I never had the opportunity to meet in person, but we conversed online a lot and I certainly considered him a friend  One of our last conversations was about this Brussels Airlines kit that I sent.  Obviously, his review will never be completed.  He died much too young, but his passion for travel never wavered.

The Airbus 330-200 we flew on was old, but the newly refreshed cabin made it seem quite modern.  20 of 22 seats in the Business Class cabin were occupied.  A quick glance into the economy cabin showed it was maybe half full.

My initial thoughts on the seats were that they were comfortable for sitting, but a little short for someone of my height (6 foot 3) in the flat bed position.  In order to get into bed position, your legs must go ‘deep’ into the seat in front in order to fit.  When trying to sleep I noticed that there was some light pollution from the IFE screens, but of course that is what eye masks are for.

Meal service was very efficient as one would expect for a relatively short and late night Trans-Atlantic flight.  Here is the menu, which was offered in English, Dutch and French:

It is with great pleasure that we offer you this brand new menu to present you with a range of culinary delights, especially designed for you today, based on important criteria such as freshness, quality and creativity.

As the national airline of Belgium, we would like to act as ambassador for our esteemed Belgian cuisine as well. We made a tour of some of the highlights of our gastronomic landscape, and we are proud to offer you a choice that includes superb Belgian dishes, cheeses and, of course, our famous chocolate.

Africa is our second home, and our passion for this continent is also reflected in the composition of our menu.

Fiona Morrison, our Master of Wine, has selected wines from prestigious cellars around the world.

We wish you “bon appétit” and a pleasant flight.

You may choose to have a starter, cheese plate and dessert served to you as soon as possible after take-off, instead of a traditional multi-course meal. Please let your flight attendant know if you prefer this option.

A selection of warm bread rolls is served throughout the meal

Coffee and tea accompanied by a delightful selection of alcohol-free chocolates manufactured by Neuhaus, Royal Warrant Holder and the leading Belgian luxury chocolatier.

Fresh fruit is available at any time after your meal

A light breakfast will be served before landing at Brussels

If you prefer an additional hot breakfast item, please ask your flight attendant.

Our cabin crew is happy to assist you in making your choices.  Please accept our apologies if occasionally your selection is not available.

There was a drink service  followed quickly by the main meal.  The service was on a cart, and the first course was already on the tray. 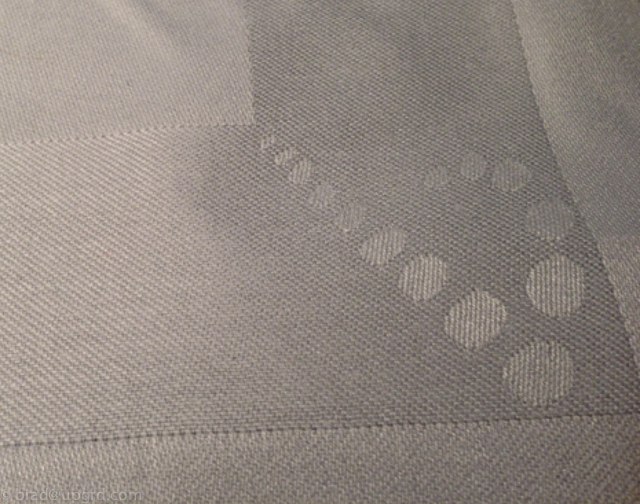 The tablecloth was Brussels Airlines branded 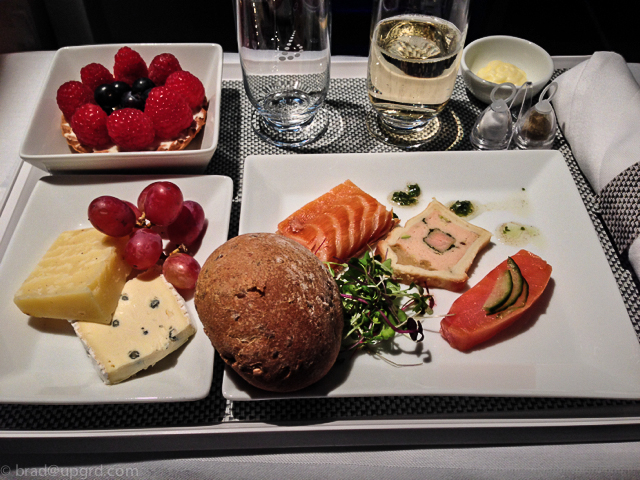 The Salmon trio was tasty.  Salmon in some form is the the go to appetizer in airplane premium cabins.  This variety was a nice way to mix it up a bit.

Also on the tray was utensils wrapped in a napkin.  For some reason there was an obscene number of utensils included: Brussels Airlines utensils.  No mixing of starter and main on a fork

After the starter course, the flight attendant returned with a cart containing drink options and the hot main dishes. 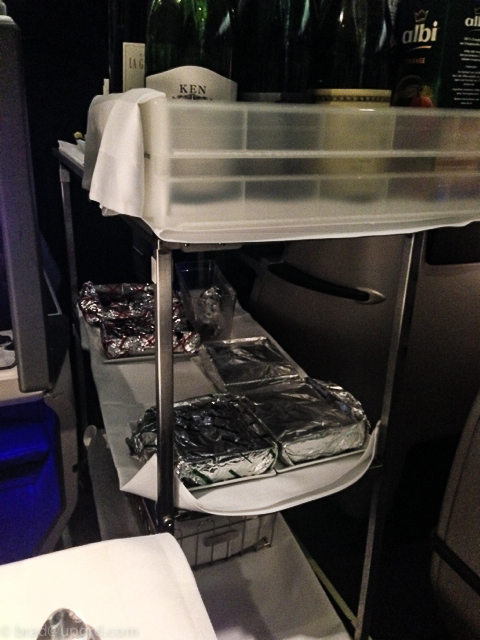 They refreshed drinks and served the main courses.  There was one flight attendant working each aisle.  With only 20 passengers in the cabin, the service was pretty prompt.  The crew was very friendly, and for most of the flight, we had the same flight attendant serving us.  The cart service was rather informal, but it was nice to be able to see each option before making a decision. 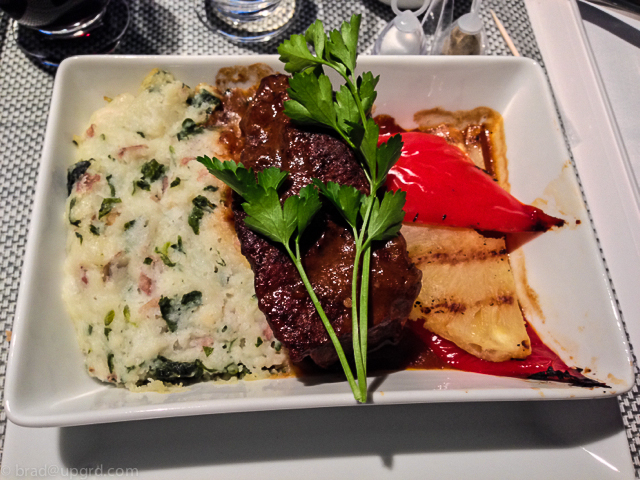 Relaxing during the flight

This was a nice meal at this late hour.  I would have likely eaten before the flight or maybe done the express meal option, but due to the rush to make this flight, I just went with it.  I had a little bit of the fruit tart and the cheese. Soon after the meal, I went to the lavatory to freshen up and get ready for some sleep.  The flight attendant placed a water bottle in the holder near the IFE screen. The Business Class lavatories are a typical Airbus configuration, with additional amenities.

After returning to my seat, I explored the IFE a little bit as I reclined my seat to a fully flat position.   The interface is easy to use, and is touchscreen controlled with an additional remote.  There was a decent selection of movies and TV programs, but to be honest, I didn’t spent much time exploring it since most time on board was spent eating or trying to sleep. small remote that controlled lighting and some basic IFE functions 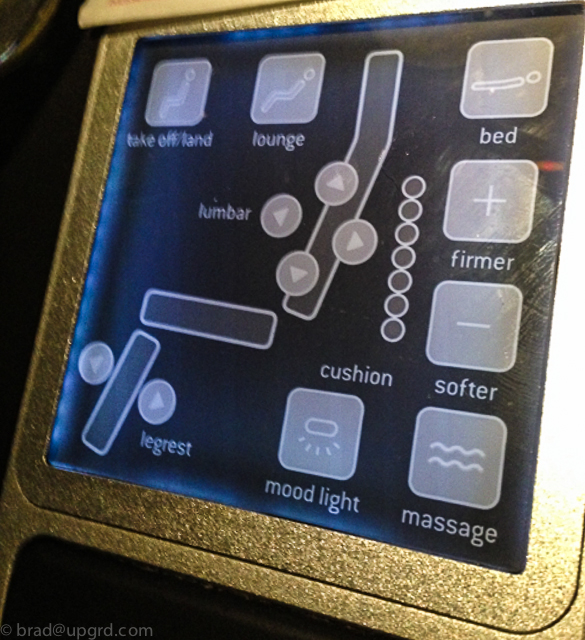 The seat had many options to adjust.  There was some sort of air bladder that allowed for a firmer or softer seat/bed.  There was also a decent massage function and a 4 way lumbar support.  This easy and intuitive system was appreciated, while the tray table was about as complicated as anything I’ve seen. In order to stow, 2 arrows must align on a post, and only then can the table be put away.  The tables stack in the armrest between the paired seats, and it requires 2 hands and some significant effort.

I didn’t sleep all that great, as it was a short flight. Plus I’m too tall for these seats, but the flat bed was appreciated.  Flight attendants did make unobtrusive passes through the cabin during the flight.  About 60 minutes prior to landing, a continental breakfast was served.  Apparently a hot option was available too, but I was not particularly hungry, and this breakfast was sufficient. a glass of freshly squeezed juice Fruit, croissant and yoghurt with some tea

Other than the stress of making this flight, I was quite pleased with the Brussels Airlines Business Class experience.  I would recommend it, and certainly take this again if the opportunity presents itself.  Brussels Airlines is a small operation at least in terms of long haul flying, with only 8 widebody planes.  The service to Dulles began in June 2013.  The flight attendant mentioned that he only had a 21 hour layover in Washington, which seems short to me.  The staggered seating configuration was nice, especially traveling with a partner.  Being very tall or wide might be less than ideal in these seats, but it was fine for a relatively short flight, and the flat bed is definitely preferred over an angled or recliner seat.  The Belgian chocolates provided before arrival were a nice touch.

We arrived early into Brussels, and had a long walk to immigration where we would enter the European Union.  From here we changed terminals to the Schengen gates and had a little lounge time before continuing on to Zurich where we would spend the night.  Unfortunately, we would be without our luggage.