After flying to Paris in Continental’s BusinessFirst I spent a few days with friends and visited the Catacombs. The next leg of my Aeroplan award was one segment on EgyptAir (MS) in business class from Paris (CDG) to Cairo. Many of my friends that lived in Europe and Cairo shook their head saying I would not like the flight and thought I should have booked another carrier, but I was pleasantly surprised.

As with checkin, boarding was delayed and chaotic. I stopped in the Star Alliance lounge in CDG before heading to my gate. Although the aircraft was there at departure time, boarding didn’t start for another hour and we departed two hours late. Luckily this actually was better as I had to wait a few hours in Cairo for a friend anyway.

Once on board, business class was lightly loaded, only 10 passengers. The new A333 from EgyptAir has two classes: Business and Economy and all seats provide their inflight entertainment system. 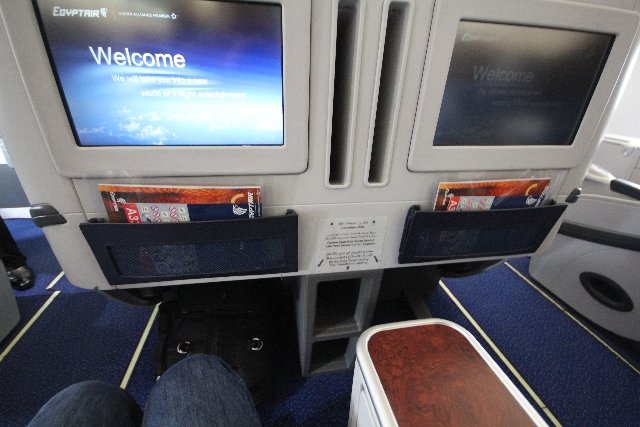 The flight attendants brought a choice of drinks to start: Orange, Guava or Water. EgyptAir is a “dry” airline, no alcohol is provided.

The seat was comfortable but the angled nature when reclined is not. Although this was only a four hour flight in the early evening I tried reclining the seat and relaxing to test the comfort when sleeping. I found the angle to be steeper than other angled seats and uncomfortable.

An Airline Alec Baldwin Would Love

Those of you reading this blog post a year from now may forget the reference, but Alec Baldwin was recently removed from an American Airlines flight for refusing to turn of his cell phone after the door was close during taxi. On EgyptAir the pilot’s announcement both welcomed us onboard and stated “the use of computers and cell phones are allowed during the entire flight”. If only my U.S. cell phone worked in Paris, I would have loved to give it a try. But at least I didn’t feel bad videoing during take off.

With a flight time of 4 hours and 10 minutes and a delayed departure the flight attendants came promptly to serve dinner. No menu was provided. The first course was pate, salad and cheese. The service was on a tray with each item individually wrapped, the flight attendants didn’t bother to unwrap any item only plopping the tray down in front of me. After finishing the starter, the flight attendant rolled a cart through the aisle with each of the main course dishes on top. The choices were chicken, beef or fish. (sounds like a line from a movie.)

I chose the beef kebab which was accompanied by stewed vegetables, sauteed mushrooms and a shredded potato hash brown side. The food was well seasoned and tasted good, but most was mushy. Overall a 2.5 out of 5. 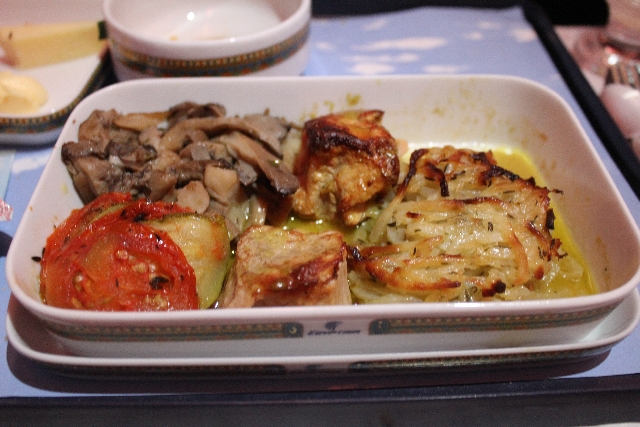 For dessert I chose the kanafeh and a coffee. They also made espressos and other coffees upon request from the galley.

Overall an enjoyable short flight but the service left a lot to be desired compared to the competition in the region.