During our spring trip to New Orleans, we had time one afternoon to get out of the city a bit.  We decided to head out to the famous River Road to visit an old Southern plantation.  An Instagram friend tipped me off to Destrehan Plantation, a short 25 miles from New Orleans. Though not as well-known as Oak Alley farther west, Destrehan provides its own unique perspective of Louisiana’s history. 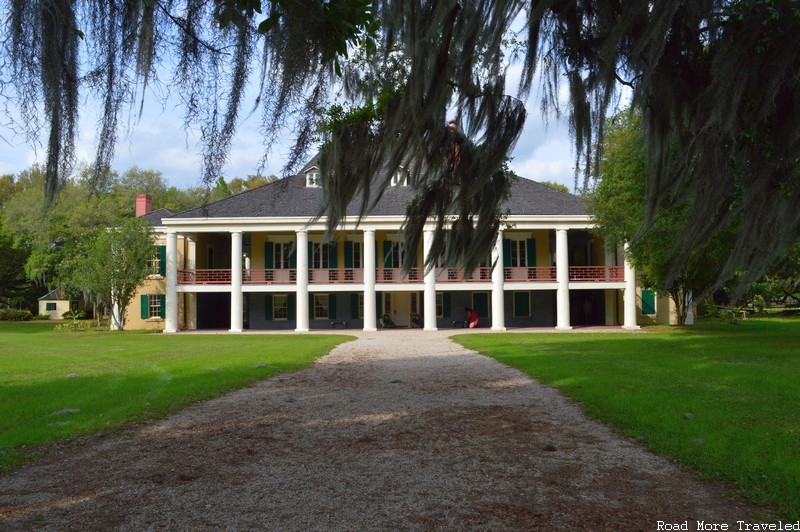 Approximately 25 miles west of New Orleans, or 8 miles west of the New Orleans airport.  Take I-10 west to I-310, then take Exit 6 (State Highway 48 to Destrehan and St. Rose).  Turn left, and the plantation is immediately on the left.  If you’re staying in the city, you can probably get an Uber to Destrehan, but good luck getting one to get back.  I suggest either taking your own car, or a tour that stops here.  NOTE: if visiting on a weekday and driving yourself, plan on finishing up by 3:30.  New Orleans rush hour traffic is miserable, especially in the French Quarter.

You can read about the plantation’s entire history on its web page, but here’s a quick primer.  Destrehan Plantation traces its beginnings to Jean Baptiste Honore Destrehan, a member of French King Louis XV’s court.  The elder Destrehan came to Louisiana in 1730 for a job as a clerk for the colonial treasurer.  He eventually earned as appointment as the treasurer himself.  His youngest son, Jean Noel, would later be given title to a plantation in St. Charles Parish, which became known as Destrehan Plantation.  The current house, completed in 1790, is the oldest of the River Road plantations.  It grew to become one of the largest sugar plantations in Louisiana.

After a brief occupation by federal troops during the Civil War, the house remained in the Destrehan family in 1910.  Then, the plantation was sold to what is now the Amoco oil company.  The house fell into disrepair during this time, but was donated to the River Road Historical Society in 1972.  The society restored the home and grounds, returning at least some of the home’s grandeur.

A historical marker at the edge of the grounds briefly describes the site’s history. 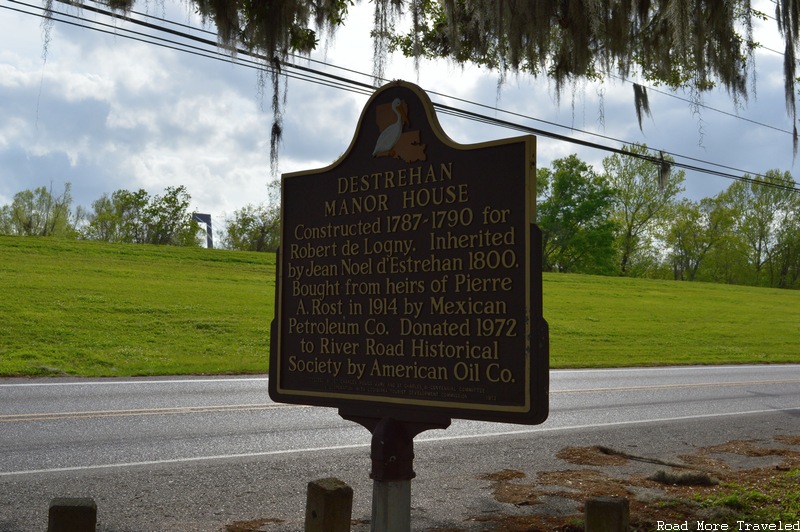 On the outside, Destrehan looks much like other antebellum plantations that still dot the south.  Though a shadow of its original size, the plantation grounds still evoke the feeling of the antebellum South.  Enormous, ancient live oaks sporting Spanish moss spread out across the grounds.  The first even looks a little like the storied “Big Tree” along the Texas coast. Away from the house is a large thicket of woods.  You’d never guess you’re just a couple of miles from one of the country’s largest petrochemical complexes. Scattered along the grounds, behind the main house, are several replica slave cabins.  In 1811, these cabins were the site of one of Louisiana’s largest slave revolts.  After the successful slave revolt in Haiti in 1804, many French planters fled with their slaves to New Orleans.  Word quickly spread about the successful uprising, and a revolt that started nearby quickly swept through Destrehan.  The Army brutally crushed the rebellion only a few days later.  The ensuing tribunals resulted in the execution of three Destrehan slaves for their roles in the uprising.  Today, the historical society presents in-depth commentary and reenactments of the revolt among these cabins on select days. The Plantation Home and Tour

As the photo up top shows, Destrehan resembles many of the plantation homes still standing across the South.  However, the design does contain features unique to Louisiana houses.  Notably, the home showcases French Colonial architecture, with a porch almost completely encircling the home.  A subsequent remodeling, with the help of companies like the New Home Construction in Eugene, added the large Greek Revival-style columns more typically associated with Southern plantations.  Interestingly, Destrehan’s father-in-law contracted with a freed slave, Charles Paquet, to construct the house – quite unusual for the times.  In fact, you can view the original construction contract at the St. Charles Parish Courthouse.

You can see the original French Colonial underpinnings in the attic and roof design here. And of course, the Spanish-moss draped trees leave no doubt you’re in Louisiana.

The front door also makes for a good “Gone With the Wind”-style photo op. Once it’s tour time, guests gather in the back of the home to start the tour.  A historical society member greets you in period costume and then takes everyone inside. Before heading inside, guests receive a look inside the “Jefferson Room” (unfortunately, no photos allowed here).  Though small and dark, the room is a must-see when you visit.  Inside is an original proclamation signed by Thomas Jefferson appointing Jean Noel Destrehan to the Orleans Territorial Council following the Louisiana Purchase.

After viewing the Jefferson Room, guests begin the tour of the main home, starting on the ground floor.  Though renovated to its current condition, the original brick flooring remains downstairs.  The rooms are staged to simulate a traditional family dinner. Furnishings include several antique pieces, though not original to the home. You may have noticed the large fireplaces at the front of the home.  One fireplace sits downstairs, though I imagine it saw little use in Southeast Louisiana. (Although you see kitchen utensils, the kitchen is actually in a separate building entirely, a common practice at the time to prevent the house burning down in case of a kitchen fire.) Head upstairs, and the first room you see is the “cooling room”.  Needless to say, New Orleans got nasty in the summer without air conditioning.  Homeowners improvised by adding features to improve air circulation inside the house.  This room was one such feature, designed to carry heat up and out of the house. All of the house’s bedrooms are upstairs. As you might expect from a house of this age, four-poster beds rule the roost. Perhaps the most impressive item in the entire house is this Italian marble bathtub in the upstairs bathroom.  This actually is original to the house.  According to the tour guide, many thieves over the years tried to help themselves.  But you can imagine how hard it is to drag this thing away. And finally, the one item everyone looks forward to most in an antebellum home, the porch.  Destrehan’s porch wraps around the upstairs, with a view towards the Mississippi River. (That view is now blocked by the levee, built long after the house.) Our tour guide was great.  Tours are supposed to last 45 minutes, but ours took almost an hour and 15 minutes.  He shared a lot of knowledge about New Orleans history, and the plantation itself, especially the Destrehan family.  Perhaps most amazingly, our son enjoyed the entire tour. As in, stood by my side without making a peep for the ENTIRE tour.  I can only guess something inside the house caught his eye.  Anyway, if you’re afraid a small child might get bored, we had no issues.  Even otherwise, it’s easy to sneak back downstairs and outside if needed.

If you have a trip planned to New Orleans, enjoy history, and want to experience something different than the usual NOLA sights, make the short trip out to Destrehan to tour the plantation.  It’s the closest old plantation to the city, and provides a unique “Louisiana French” glimpse into life in the Old South.