Before heading to San Diego in Delta’s new A321neo First Class,  I had nearly 5 hours to kill in Boston. Though Logan has several Priority Pass options, unfortunately none are in Delta’s Terminal A. Since I also connected from Dallas on Delta, that posed a problem. I could try clearing security in Terminal B for a free meal at Stephanie’s. But I really didn’t feel like clearing security twice (or risk having to argue with the TSA for access). Five hours meant plenty of time to leave the airport for a bit. And so I decided to head to “Eastie” to find some good eats and take a short walking tour of East Boston.

The History of East Boston

Before I start, perhaps a more accurate description is “short walking tour of Jeffries Point”. Although it was a short walking tour of East Boston, I only had about 2 1/2 hours to get back to the airport after making a couple of phone calls home. So I didn’t really have time to go through the all of Eastie.

Anyway, East Boston, aka “Eastie”, originally was a separate settlement altogether. East Boston originally consisted of five separate islands – Noddle’s, Hogg, Governor’s, Apple, and Bird. The islands remained largely undeveloped until the 1830s. At that time, William H. Sumner laid out a street grid on the largest island, Noddle’s, which led to the first residential settlement. Jeffries Point, on the southeast side of the island, became the first developed neighborhood in 1834. A sugar refinery and the shipbuilding industry soon followed, turning East Boston into a boomtown. The rapid expansion let East Boston’s big brother, the City of Boston, to annex the town in 1836.

So what happened to the other islands? Hogg Island, which separated East Boston from Revere and Winthrop, was connected to Noddle’s via landfilling in the 1940s. As for Apple, Bird, and Governor’s Islands? These were also landfilled in the 1940s, later subsumed by the runways and taxiways of Logan Airport.

Perhaps Eastie’s most significant contribution to Boston’s history is its role in immigration to the United States. Starting in the mid-1800s, Eastie became known as “Boston’s Ellis Island” for the many immigrants who settled here. In the 19th century, Irish and Canadian immigrants settled first, followed by Russian Jews and Italians. Moving into the 20th century, Southeast Asians settled here, and more recently, Hispanic immigrants from Central and South America. One particularly famous Massachusetts family traces its history to Eastie. The Kennedy family immigrated from County Wexford in Ireland in 1849, settling in a small home on Meridian Street.

How to Reach East Boston from Logan Airport

To reach East Boston from the airport, Terminal A is the best starting point. When you exit on the lower level, first head left towards the taxi stand. Though it’s hard to tell, the sidewalk continues along the bus lane extending past the terminal. After a short walk, you reach the end of the bus lane at Hotel Drive. 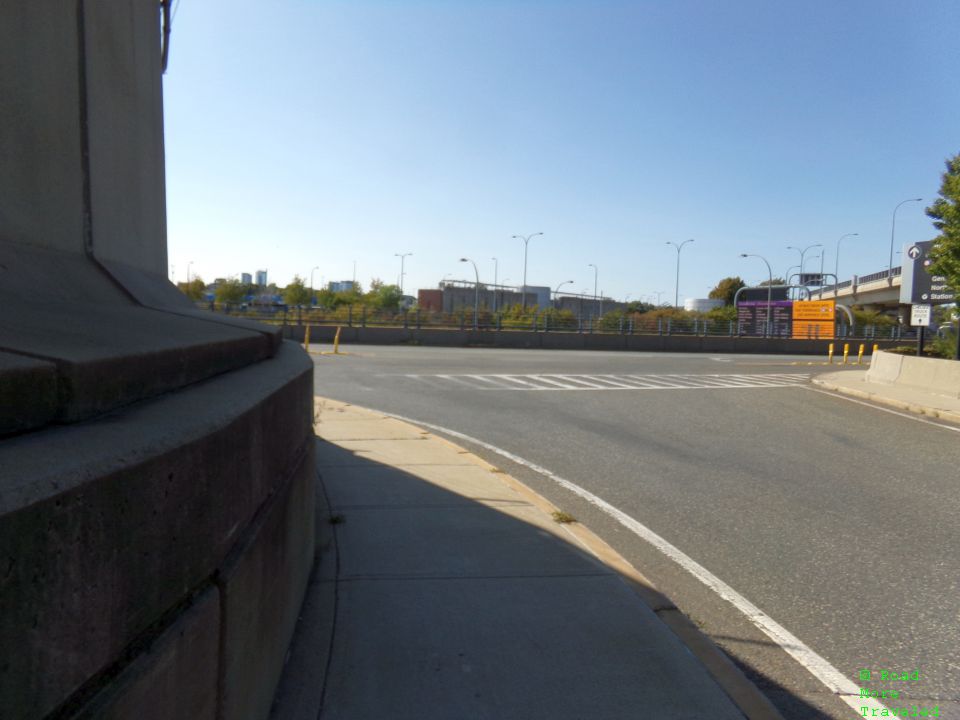 Walk to the left, and you’ll reach a large intersection. From here, Tomahawk Drive continues straight, Transportation Way is to the right, and Harborside Drive is to the left. Then head left at the traffic light, walk around the building, and continue to the red crosswalk. The crosswalk leads to Maverick Street; finally turn right to enter Eastie. Here’s a quick map showing the walking route I took to and from the airport. It was past 1:30 at this point, so getting some food was first priority. I thought about Santarpio’s Pizza, where JFK waved to the crowd during his Senate run in 1954. But I ate pizza for dinner the night before, and wasn’t really in the mood. Instead, I found Carmella’s Market, an old-school Italian market on Everett Street. It’s really a small deli counter that also sells some Italian staples. The menu is taped on flyers both inside and outside the store, with a variety of sandwiches on tap. Inside, there’s but a single table to sit and eat. An open deli counter displays the day’s selections. You can order meats and cheeses to go, and take some staples with you. 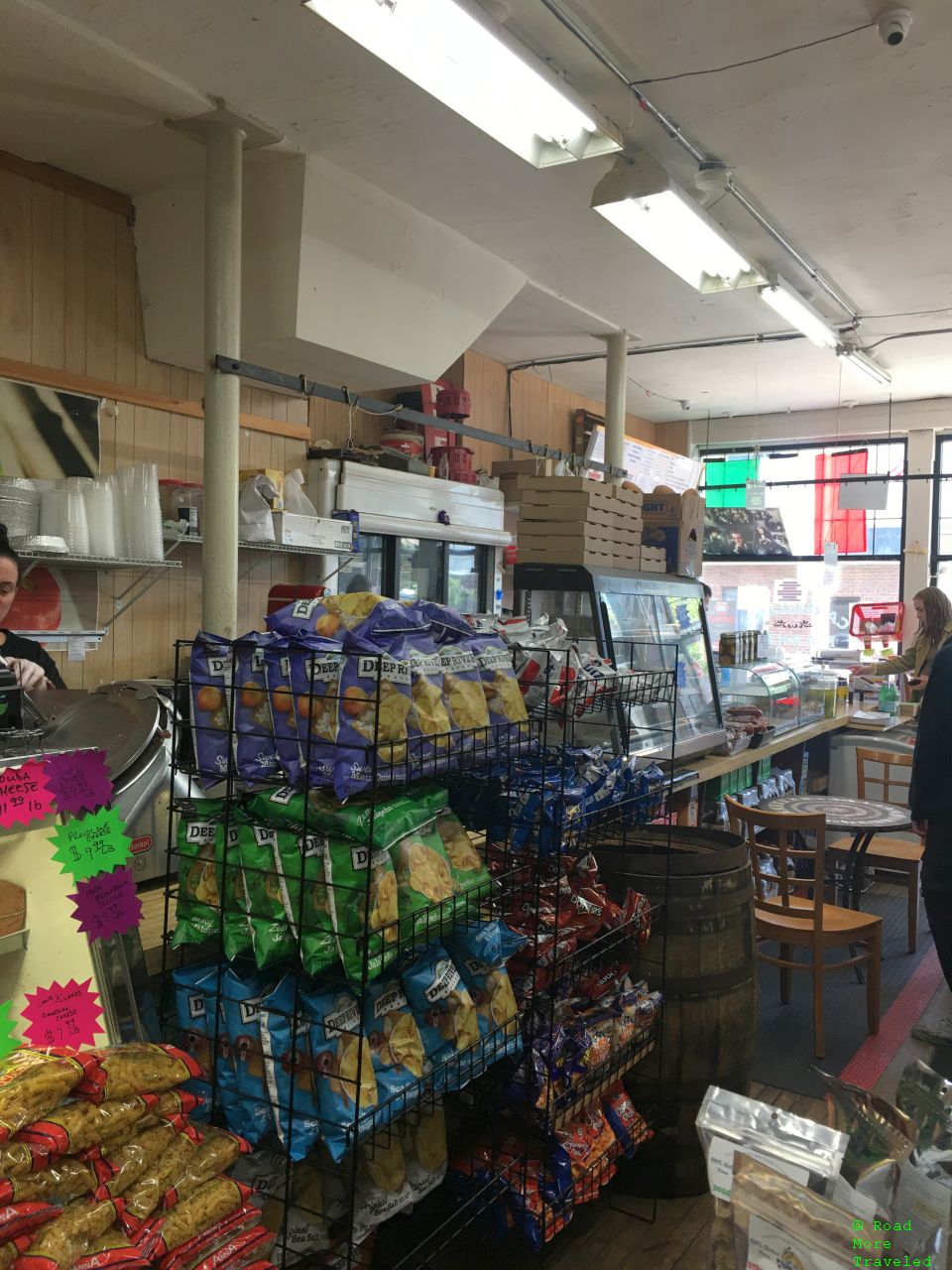 I ordered “The Taft”, a prosciutto and soppressata sandwich with provolone and vinegar peppers. The bread is freshly made, and simply put, it’s one delicious sandwich. 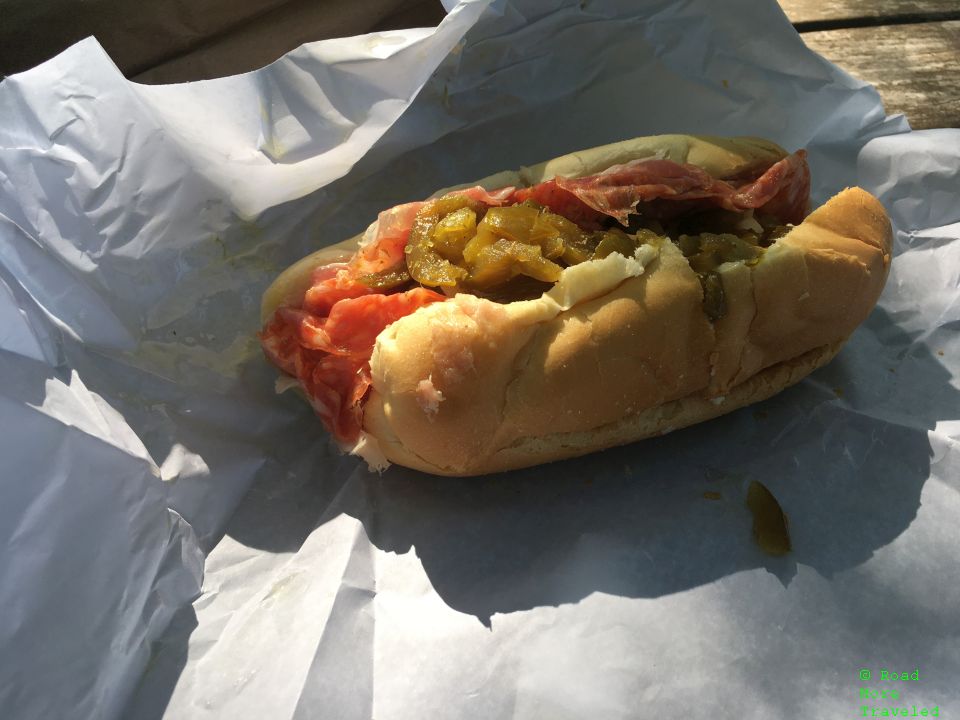 Now, since there’s only one table, where can you go to eat your meal? Fortunately, Piers Park is just three blocks south, so I headed there in search of a picnic table. I found one with a great view of Boston Harbor and the downtown skyline. Beautiful early fall weather – 63 degrees and full sunshine – made a perfect day for a picnic. 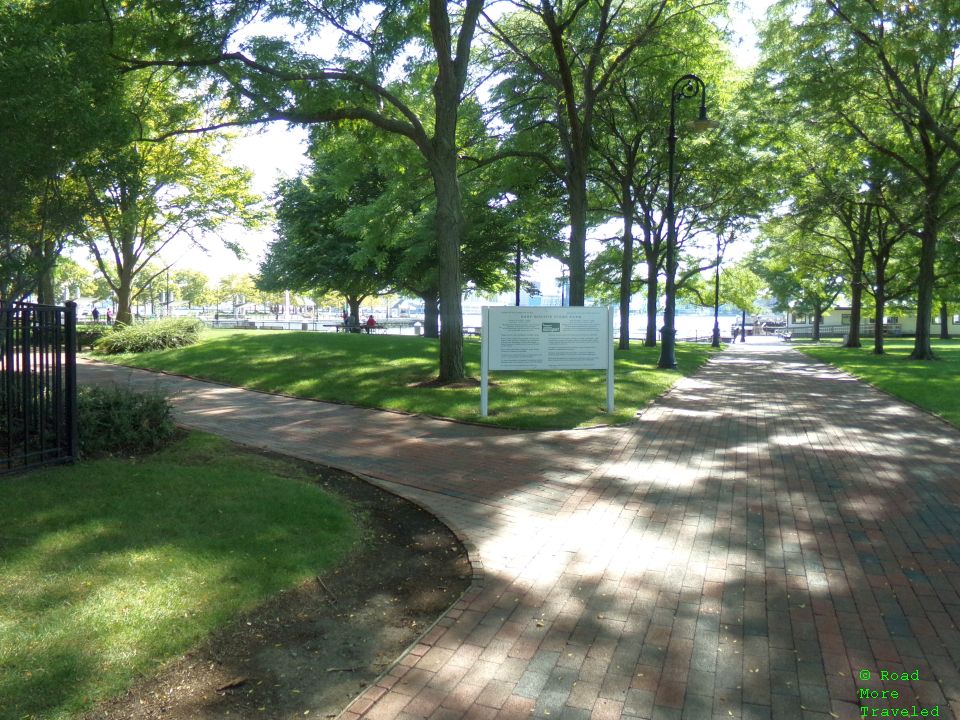 After enjoying my sandwich, I headed down to the water to take in some skyline views and admire the sailboats in the harbor, which can be bought from a local boat dealer. The park, while not crowded, saw a healthy number of Bostonians visiting to enjoy the beautiful day. 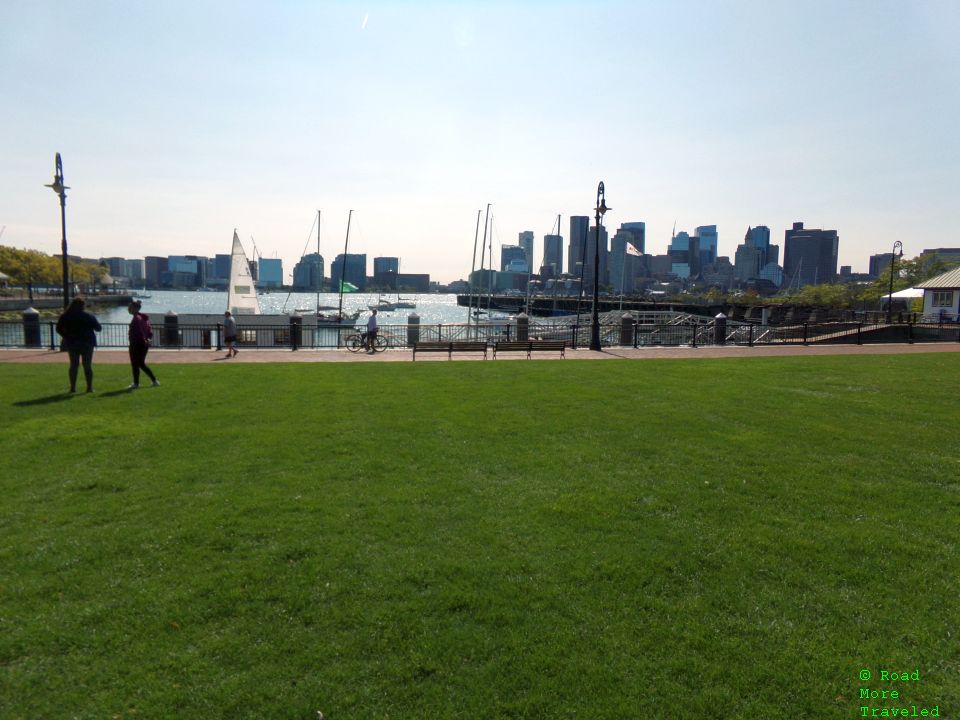 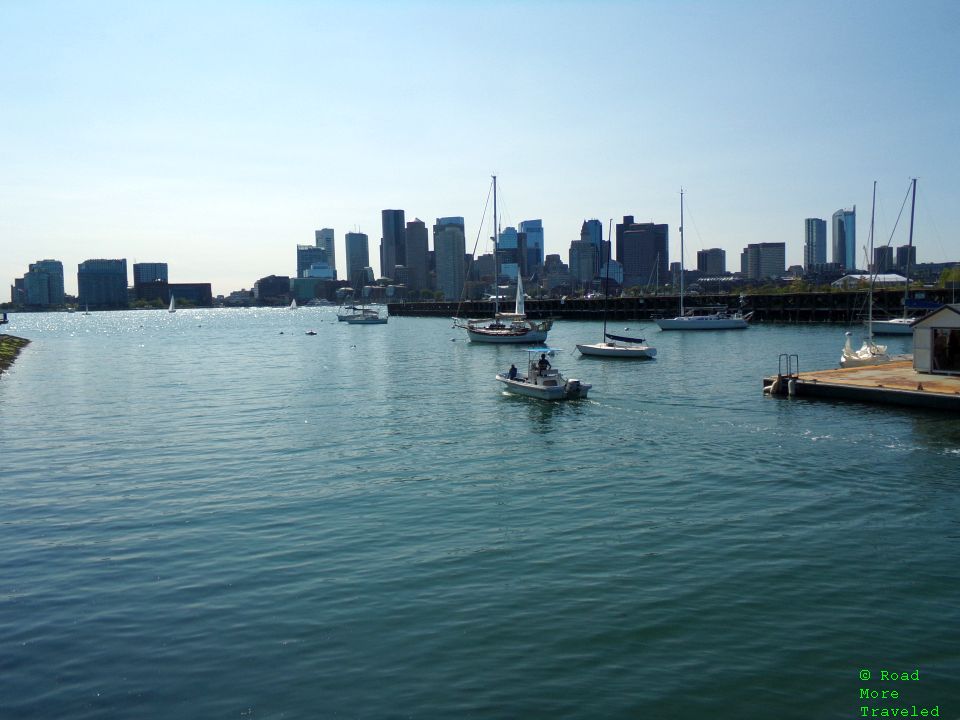 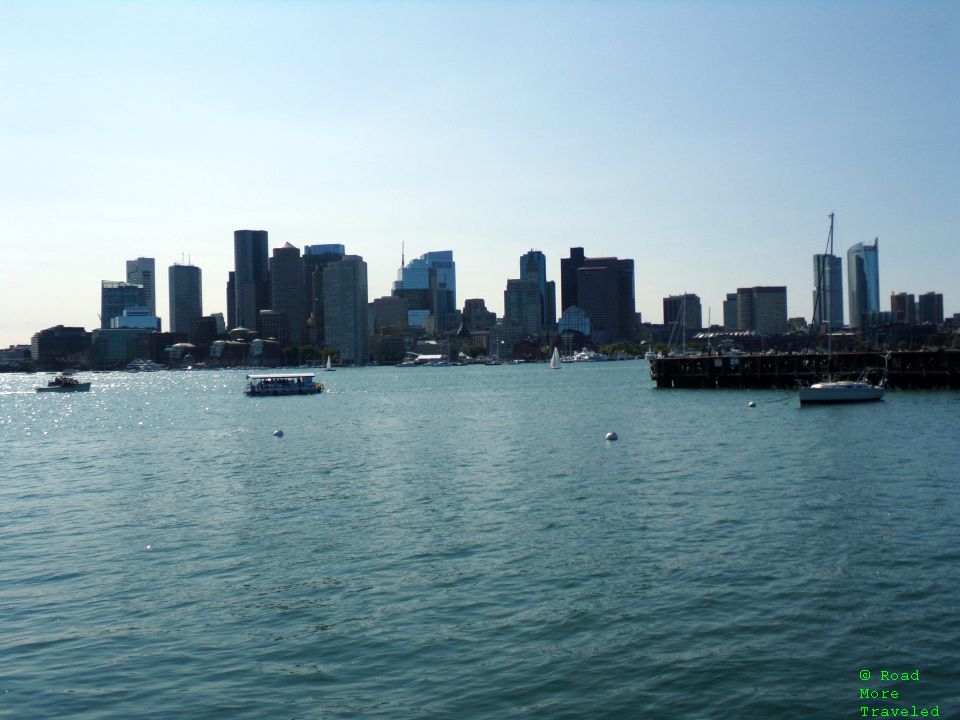 A large marina pays homage to the neighborhood’s roots as the center of Boston’s shipbuilding industry. 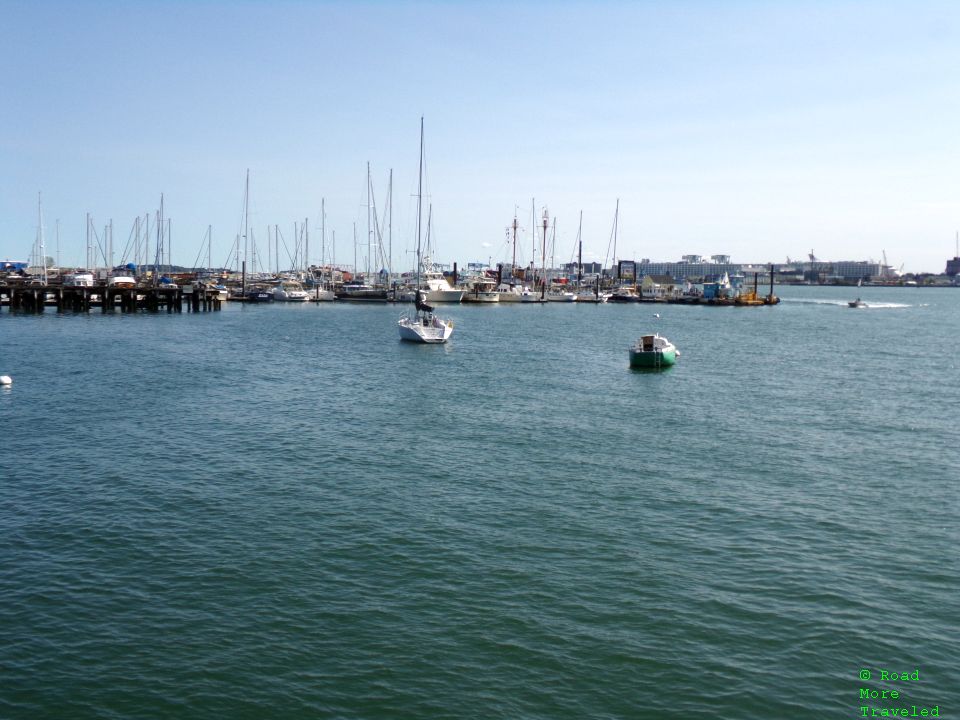 Meanwhile, a look back towards Jeffries Point from the pier provides a great view of the neighborhood. The residential neighborhood, as seen here and in the following photos, provides a glimpse of the contrast found in historic urban neighborhoods throughout the USA. Housing shortages and the increasing pains of commuting push people to rediscover close-in, historic neighborhoods. However, with that push comes the teardowns, as the value of the land underneath dwarfs that of the structure. In sprawling cities like Dallas, this spawned the “McMansion”. You’re surely seen it – the cookie-cutter suburban home about two sizes too big for the lot replacing the historic single-family home that sat there. In Jeffries Point, you’ll instead see a mix of quaint old rowhouses interspersed with the hideously ugly “Big Square Box” apartment building common in modern architecture. Anyway, after a few minutes relaxing and enjoying the view, I retraced my steps to the airport. This time, I headed down Everett Street, one of the main streets through Jeffries Point. A beautiful, quiet Saturday afternoon is one of the best times to walk through neighborhoods like this one. Tourists are few and far between, but you’ll see the locals out and about enjoying the weekend with their families. And as I alluded to before, the odd mix of historic rowhouses and modern Rubik’s Cubes. 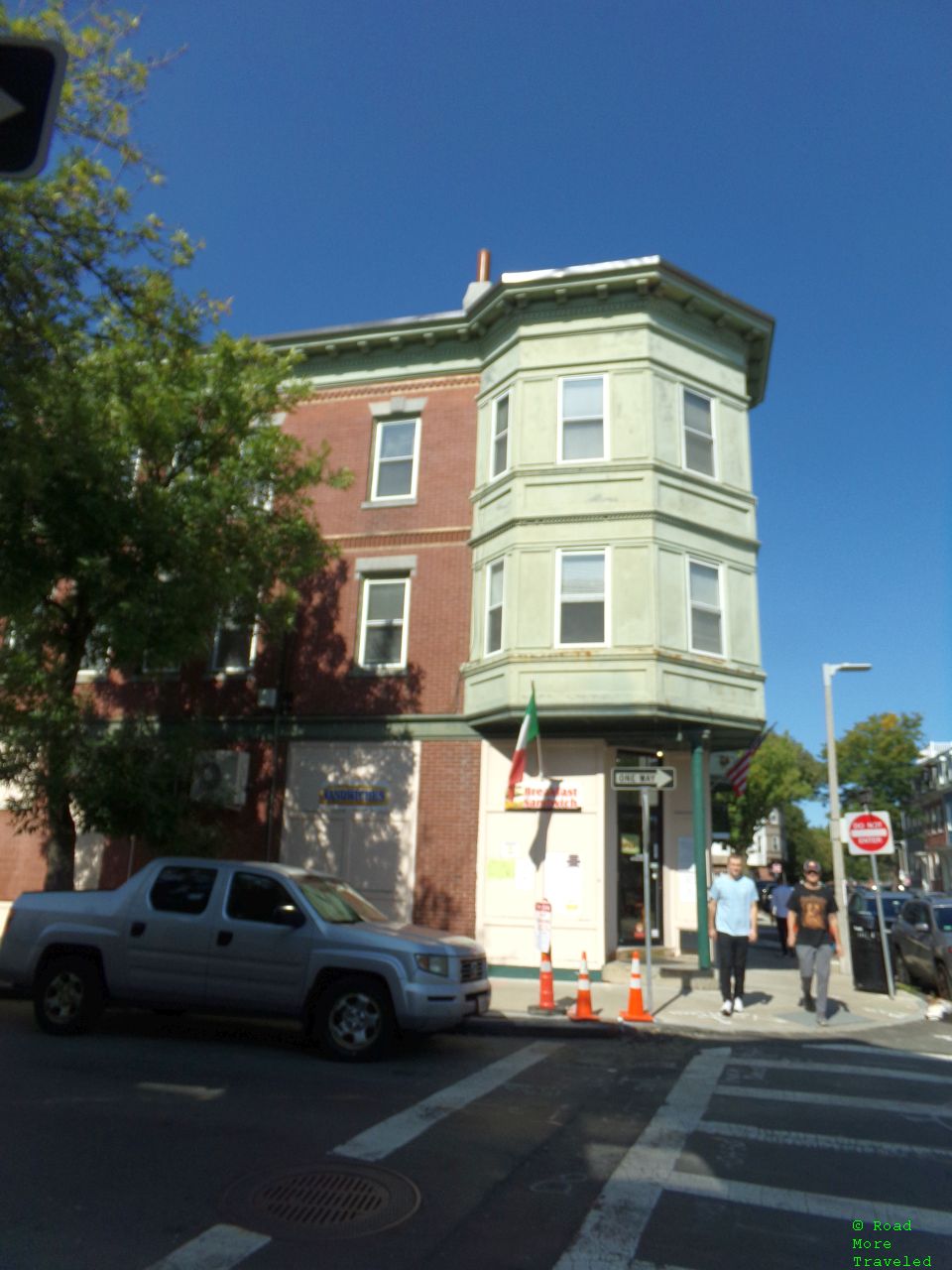