Hello Lufthansa First Class, it is nice to see you again.  For this flight from Toronto to Munich, I’d have the Airbus 330-300  First Class cabin to myself. Score! Note: getting this posted has been delayed by a major event in my life, the birth of my daughter Adeline.  My wife’s pregnancy is also why I took this trip solo, as it was originally intended as a getaway for both of us.  We were going to go to Koh Samui, but ultimately it was too far along in her pregnancy to go that far away, so I modified the trip, shortened the duration and went solo.  My wife is wonderful for many reasons, and her letting me geek out with this trip on my own is just more evidence of this.  Our trip to Costa Rica was a ‘closer to home’ trip that we enjoyed together.

While I missed the gate party in Toronto for the inaugural celebration, I had a nice time before my flight.  While I sort of knew the routines of the service from having flown Lufthansa First Class previously, it was quite the experience being alone in the cabin.  Service began with several members of staff greeting me at my seat and bringing various parts of the service, including menus, amenity kit, and a drink of my choice. I’m typically not a big champagne drinker by any means, but it is one luxury I enjoy when flying in premium cabins.  Laurent-Perrier Grand Sicele was being served, which is highly regarded (and typically in the range of $135 per bottle), so I was happy to have my first taste on this flight.  I noticed that the champagne glasses were etched inside to produce a consistent pattern of bubbles.  Science is cool.

Soon after takeoff, I was offered another drink.  This was in June, and the menu had some World Cup related features, so I decided to go festive and try a Caiprihna.  I asked the flight attendant how it was, and he suggested I try it, and he would make me something else if I didn’t like it.  Why not… 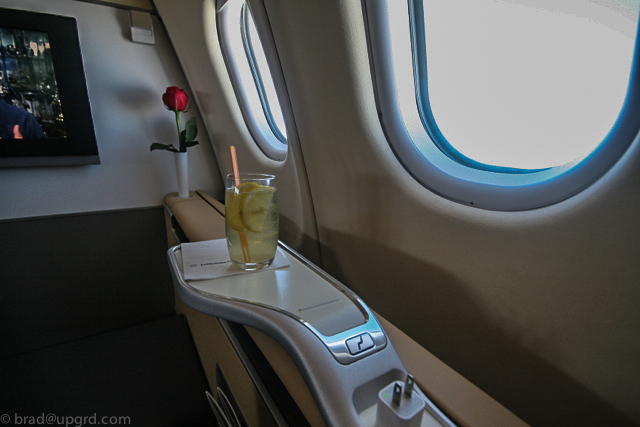 National drink of Brazil on a German Airline flight from Canada…

It was decent enough, but of course it was from a mix.  It was much better than a pre-mixed margarita or Mai Tai on United, but it wasn’t as authentic as what is served in Brazil.  There wasn’t even lime! An amenity kit was provided which was new to me.  From what I can tell, this Escada amenity kit is in use for some part of 2014.  The case is nicely made of leather, and could be repurposed as a tablet case.  Contents of the men’s kit are don’t seem to have been updated from past versions.  It contains socks, eyeshade, earplugs, hair brush, toothbrush, toothpaste and some Lamarin face lotion.  Other items including mouthwash, razors, shaving cream and more are available in the lavatories.  Here is a brief review of the Escada kit.

There were also the familiar Bogner pajamas provided before departure.  In previous reports, I have done a more detailed review of the new version of the Lufthansa First Class seat.  I’m not going to repeat that here.  The seat is as installed on the A380, 747-8i, and on upgraded Airbus 330 and 340s. The updated 747-400s have the same seat, but also have a separate bed. I’ll talk about that soon enough.  Here is a link to my first flight in Lufthansa’s New First, where I reviewed the seat and features in detail.  Quickly, its a great seat for lounging, has decent storage, and with a movable privacy screen and excellent bedding, is great for sleeping, as long as the cabin isn’t too warm. Soon after take off, my meal order was taken.  Here are the menus from the first service.  They were printed in German, English and French:

Caviar from Service Cart
Caviar with the traditional Garnishes

As usual, Lufthansa seems to try really hard to make the menu sound complicated and fancy.  The food was good, but it is still just reheated food that was presumably catered in Toronto.  Still, I did my best to take advantage of the personalized service.  The meal began as it always does in Lufthansa First with a amuse bouche which was not on the menu.  In this case it was a vegetarian spring roll. Similar to champagne, I only eat caviar on flights like this. I can’t really say I’m a fan, but especially when traveling like this, I can try to play the part. I don’t usually turn away food placed in front of me. Not to say I ate it all, especially since I seemed to get a generous serving as the only passenger in the cabin.  Oh well, First Class stuff… Those who appreciate caviar may consider ordering Russian Osetra Caviar for Sale Online to try at home. For the appetizer course I went for a mix.  This service used to served in a tower.  Passengers still have options, but presentation is different, being on small plates served from a larger serving tray.  I opted for 3/4 choices, the salad, lobster claw and the tandoori chicken.  As I recall the chicken was excellent.  I’m still of the opinion that savory and spicier foods tend to translate best when dining at altitude. Lufthansa usually serves steaks quite well done.  I prefer a cooler temperature, and ideally the pinnacle of airplane cuisine, medium rare.  I usually steer clear of steak on Lufthansa, but nothing else really sounded good to me, other than maybe the Gnocchi.  That seems kind of a waste to have on a plane.  I was hoping the bacon wrapped presentation would keep the steak moist and tender, and thankfully that proved to be the case.  The steak was cooked through, but thankfully was tender and not too dry.  Along with the steak I also added the St. Henri Shiraz. Lufthansa steak: well done, but not a hockey puck

Next was the cheese and dessert.  Portions are somewhat small, but I’d rather have it that way so to be able to try more.  And I certainly did that on the final courses.   I have a somewhat selective sweet tooth, but I didn’t want to pass up on the cheese options.  I saw Manchengo and recalled fond memories of Spain. Instead of choosing between the options, I just said ‘yes’ and tried each.  The bread pudding was tasty and the mango sauce was fine. Oddly, a Lufthansa signature rose while watching a Mumford and Sons concert..

After all of this dining, I figured I’d take advantage of the comfortable seat, recline and watch some TV.  Since I was doing a double redeye (next going onward to Asia), I didn’t really have much need to adapt to time at the destination of this flight, so I didn’t plan to sleep very long.  Somewhere along the way, the flight attendant noticed me sneezing and going to the lav to get more tissues.  Eventually he saved me a trip, and delivered a box. Simple, but a very nice (and appreciated) touch.  I have seasonal allergies, and I guess my day in Toronto really caused them to act up. Apparently this was the first time this particular flight attendant had served First Class.  Maybe it is because there was only me in the cabin, it would be a good way to train him.  Overall, he did a good job, and maintained the service standard I was used to.  I’ve had a mix of attendants across all ages and presumed seniority in Lufthansa First Class unlike some other airlines where First Class attendants are usually very senior. Eventually I did decide to get a little sleep.  I asked the flight attendant to to make up my bed, and slept for a few hours.  The transatlantic flight wasn’t very long, so when I woke up I was I was pretty groggy.  I wasn’t very hungry, so I just had a light breakfast.  I knew I could get a more substantial meal after landing when I was more alert in the Lufthansa First Class Lounge in Munich. I don’t eat eggs for breakfast all that often and even though Lufthansa usually makes fresh egg dishes in First Class, I was too tired and full to order anything else.  I presume it would be available, but the menu didn’t show it.  Maybe others who have taken a similar flight could answer this?  I do know the orange juice was freshly squeezed and tasty like always.

Another flight in Lufthansa First Class was done.  Flying alone really made me realize how special it can be and how short transatlantic flights often are.  I really enjoyed the experience, and my trip was off to a good start.  Next was a brief layover in Munich before a hop to Frankfurt and beyond.