Our periodic trip to SoCal to visit my in-laws came due a few weeks ago. Since I didn’t have time to make it a road trip, what better opportunity to engage in some plane-geekery.  Over the past couple of months, American deployed new Airbus A321 aircraft on the DFW-LAX route to replace its older 757s.  Better yet, thanks to good pricing and favorable scheduling, I worked it out to where we could fly the “32B” in domestic First one way and Main Cabin the other at a reasonable price.  And so, the American Airlines A321 comparo was on.

NOTE:  the 32B used on standard domestic routes, sometimes referred to as the “A321S”, should not be confused with the “A321T” used on transcon routes, such as LAX-JFK.  The standard A321 is a 181-seat configuration with recliner First Class seats just like any other domestically configured aircraft, while the A321T is a three-class, 102-seat configuration with lie-flat seats in First and Business.  For a review of that product, read Rocky’s review of the A321T “Flagship First” product, or Mike’s sneak preview of the aircraft shortly before its launch.

A vicious storm early that morning dropped up to 7 inches of rain on an already drenched Metroplex, and I seriously wondered if the weather would hold up long enough for us to make it out of town.  Fortunately, the skies cleared by midday, and we enjoyed a sunny evening as we prepared to depart.  Everyone boarded, and it appeared as though we would depart on time.  A last-minute maintenance issue, though, meant our 7:10 departure time came and went.  American was nice enough, however, to keep the door open to allow a dozen or so passengers arriving on delayed connections to make the flight.  Though a delay posted to note a 7:45 departure, the problem took less time than expected to fix.  We pushed back around 7:30.

This was a new plane, with a noticeably airy, bright interior, and the all-leather seats still had that “new plane” smell.  I like the look compared to the old blue cloth seats.  The A321’s recliner seats in First feature 2 inches less pitch than most other AA aircraft (38 inches vs. 40), but truthfully, I didn’t really notice a difference.  There was still plenty of legroom, and though the power and USB ports are located on the lower portion of the seat, their placement on the bottom of the armrest made it easier to plug in a laptop. 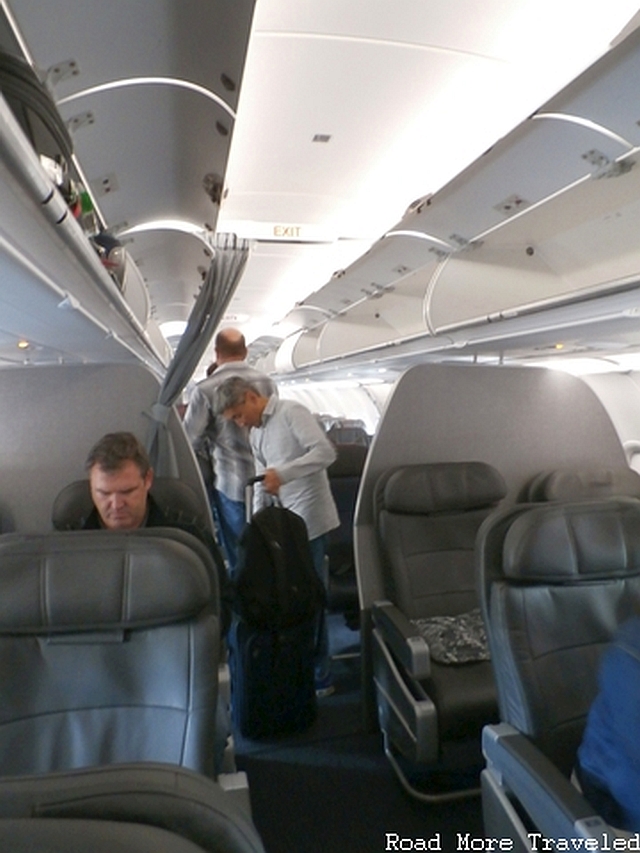 The seats contain the same 12-inch seatback TV screens found on the new 787, though with a smaller collection of on-demand TV shows, movies, and games than on the Dreamliner.  However, given that the A321 is used on much shorter domestic routes than the 787, most passengers are unlikely to notice the difference.  There was plenty on tap to keep both my wife and I occupied for this 3-hour flight.  In addition, a full slate of programming is available from gate-to-gate, making it superior to the “streaming” options on other aircraft.  I wrote about the interactive moving map feature in my review of the Dreamliner; there is a similar system onboard this plane.  However, you don’t have the option of displaying the map on both the controller and the screen. No in-flight Pacman, but there is inflight Tetris We were not offered a pre-departure beverage, irritating given that we sat around twiddling our thumbs for a good 40 minutes before the door was closed.  For that matter, service in general seemed unusually slow.  It took probably half an hour to receive our warm mixed nuts and first beverage service.  It also took nearly an hour and a half before dinner was served.  I ordered the beef short rib, which was served with a small side salad, a cheese roll, mashed potatoes, mixed roasted vegetables, and a warm chocolate chip cookie. I had a horrendous experience with American’s downgraded meal service on the first day of the new policy.  That route was downgraded from a full meal to an awful snack basket.  This was the first time I’d flown a longer route with full dinner service since the changes.  (In fairness, flights between 900 and 1,000 miles have since been re-upgraded to a full meal, and the quality of the snack baskets has reportedly improved.)  The salad was fresh, but seriously, American?  You can’t even spare a few cents for a piece of tomato or a few carrot shreds?

The cheese roll was tasty, the mashed potatoes, while a little dry, had good flavor.  The mixed roasted vegetables were tender and seasoned well.  The beef, however, disappointed.  The meat was rubbery, and the sauce had no flavor except for way too much salt.  The mixed nuts and cookie, meanwhile, would have been fine, except they had been overwarmed to the point they were burnt.  Plus, I wished the FA had handed out the cookie later.  I’m a slow eater, and it had gotten cold by the time I got around to eating it. Don’t get me wrong, I won’t turn down a cookie, even if it’s cold, but chocolate chip cookies are so much better when warm.

Overall, the meal disappointed. On the other hand, once the meal was served, the FA was very attentive to the front cabin.  She came by every few minutes to check on refills, and even offering my wife a cup of tea without her asking.

As for the seat, there was plenty of legroom as you’d expect, and back and neck support was good.  However, the bottom cushion seemed uncomfortable.  A case of numb thigh set in after about an hour and a half.  This is a problem I’ve come to expect with newer seat designs, especially Southwest’s infamous “(D)Evolve” seats.  I was a little surprised to encounter this in a First Class seat, though.  Maybe it was just the end of a long week catching up to me.

Given the daily barage of severe weather we’d been experiencing practically the entire month of may, the weather was actually nice and quiet this evening.  That made our flight smooth and uneventful.  I’ve covered the scenery between DFW and LAX before, so I’ll leave with you with just a few photos of our ride over. A Qantas A380 sitting on the apron behind Terminal D The Inland Empire at dusk

After a short weekend stay with my in-laws, we headed back to LAX on Sunday morning.  The last half a dozen times I’ve been out there, I’ve typically taken a 5-ish flight home from LA.  Both my wife and I had gotten tired of getting home at midnight, though, so we booked a midday return instead.  We’d fly the A321 again, ironically, on the exact same plane that brought us to LAX.  This time we’d fly in coach, or more specifically, Main Cabin Extra.

Just like on the flight over, we started boarding right on time.  Also just like on the way over, however, we didn’t actually leave the gate on time.  The culprit this time?  A busted tractor that couldn’t push us back from the gate.  A new one had to be dispatched, which we were told would take a “few minutes”.  Of course, 25 minutes later, the new tractor finally shows up.  Why does a “few minutes” always translate to “20-30″ in airline speak, anyway?

Anyway, our Main Cabin Extra seats were in the second row of the coach cabin.  Like the First Class cabin, seats in the Main Cabin are also outfitted in dark gray leather, and I like the look in general.  Smart but understated.  Like the 787, a power port is located at each seat directly on the seatback in front.  This rates a big improvement over the previous location between seats at the seat bottom.

The 3 extra inches of pitch (34″ vs. 31”) means ample legroom, but notice a problem, especially in the third photo?  A protruding IFE box eats up a significant chunk of underseat space at each seat.  While not the worst box I’ve ever encountered, it did constrict legroom noticeably.  I imagine this issue is more acute in standard Main Cabin seats. Good legroom, but constricted by an IFE box Airy interior of the main cabin All seats in Main Cabin feature personal screens at each seat, but offer only a very limited amount of programming for free.  This includes the “NBC on American” programming that you currently see on the overhead screens or via streaming video.  Pay-per-view movies retail for $6 or $8 per movie.  An unlimited TV/entertainment package and “Disney” package sell for $5 and $4, respectively.  These prices aren’t bad, though it strikes me as a little cheap that you have to pay the $5 even to play a game like Tetris.

If you prefer to rather watch/listen to your own content, there is the power outlet.  In addition, similar to the 787, a USB port is located at the bottom of the screen.  However, the system offers no option to play content from your smartphone/tablet on the screen.  And of course, for avgeeks, the same flight map is available. The ever entertaining moving flight map

A pair of very pleasant FAs serviced the coach cabin, and provided the standard drinks service.  They handed passengers full cans, and both FAs made a few passes through the cabin to collect trash and offer refills.  Otherwise, there really wasn’t much to say about the flight, which is really all you want when you’re sitting in coach.  However, the seat comfort issue I noted in First two days earlier appeared once again.  A dreadfully uncomfortable bottom cushion saddled me with sore thighs after a little more than an hour.  Seems the airlines still haven’t learned their lessons with slimline seats.

We passed the same scenery I’ve seen probably a hundred times before, but the odd weather provided a couple of interesting scenes on descent.  First, an overflowing Lake Arrowhead near Wichita Falls, a lake less than 10% full just a month prior.  And the second, thanks to a rare (for May) north wind, we passed just west of DFW before pulling a U-turn and landing from the south, providing a specatcular view of the entire airfield. Lake Arrowhead filled to the brim, a month after being almost completely dry View of the entire DFW airfield from the west

The A321 is a nice enough plane.  It features a far superior in-flight entertainment setup, power and USB ports at each seat, and smart leather seats.  However, seat comfort remains an issue, with the bottom cushion proving uncomfortable in both classes.  I doubt I’d go out of my way to fly the A321S.  The A321T, though, now that’s a different story…

Also noteworthy – American frequently offers First Class fares on many routes lately, with F generally available for about twice the price of Y out of DFW.  I suppose that American wants to entice flyers to “upgrade” at the time of purchase, rather than giving them away for free or on the day of departure for $99.  Don’t forget, through the end of the calendar year, American offers an additional 1.5 elite qualifying points (EQPs) on full-fare premium class fares, and 0.5 EQPs on discount premium fares, for a total of either 3 or 2 EQPs, respectively.  If you’re contemplating mileage running in style, or just want to treat yourself for a little extra, now is as good a time as any to try out American’s F product.