This week I’m trying to catch up on some past trip reports where I may have offered one or two reviews but not the whole picture. Today I’m covering my recent flight from Seattle to London in British Airways World Traveler Plus. But like all good trips, it started with a visit to the airport lounge. 😉

Check-in at SeaTac was relatively swift as we were directed to the first class line and had only carryon luggage. However, there was no PreCheck for us on this trip. Megan still had yet to update her Global Entry information. After waiting a few more minutes to get through security, we headed downstairs for the train to the South Satellite. 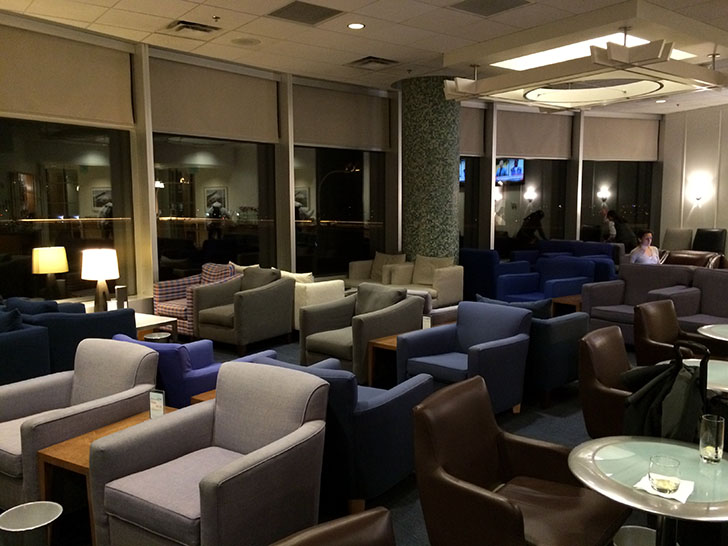 British Airways offers one of the best airport lounges at Seattle, and it’s used by several other carriers, as well. For example, we stopped there before our flight to Seoul on Asiana. It has a full service bartender (you aren’t allowed to serve yourself in Washington), one main seating area, a few computers in the back, and a shower room. The staff have always been friendly to me and very generous in addressing my requests — see the amenities list below, on the left. I actually prefer this lounge in some ways to the Galleries First lounges located at Heathrow. Admission is not granted automatically to World Traveler Plus customers, but as a oneworld Emerald member through American Airlines I did have access, including to the separate first class lounge. A quick peak inside the frosted doors told me there wasn’t any point. The food and beverage service is exactly the same and possibly more limited. The best way to describe it is as a smaller room set within the larger club. There are more servers available to take orders, but it’s not really a place to escape to when it’s crowded — as it was that evening. We chose to stay in the main business class area.

Megan ordered a few cocktails for us while I requested access to the shower room so I could change out of my work clothes and into something more comfortable for the flight. When I got back, she had a Martini waiting for me, and I grabbed some Oreos from the snack bar. The chocolate chip cookies you see in the middle jar were decent but dry. Several fresh sandwiches and other food were also available. There wasn’t any hot food, but it was still good. I would want to exit to the main terminal to eat if I were stuck here for more than a couple hours. Eventually it was time to board. I downed another drink before heading to our gate. The receptionist was even waiting at the front door with a plate of Andes mints before we headed downstairs to the terminal. All long-distance international flights depart from the South Satellite at SeaTac, so it wasn’t a long walk.