After leaving the Gritti Palace in Venice, we headed south to Rome, where I had booked a stay at the St. Regis Rome. This hotel is completing an extensive renovation this year and is famous as one of the first hotels opened by famed hotelier Cesar Ritz (it was part of the original Ritz-Carlton chain in the 1920s). 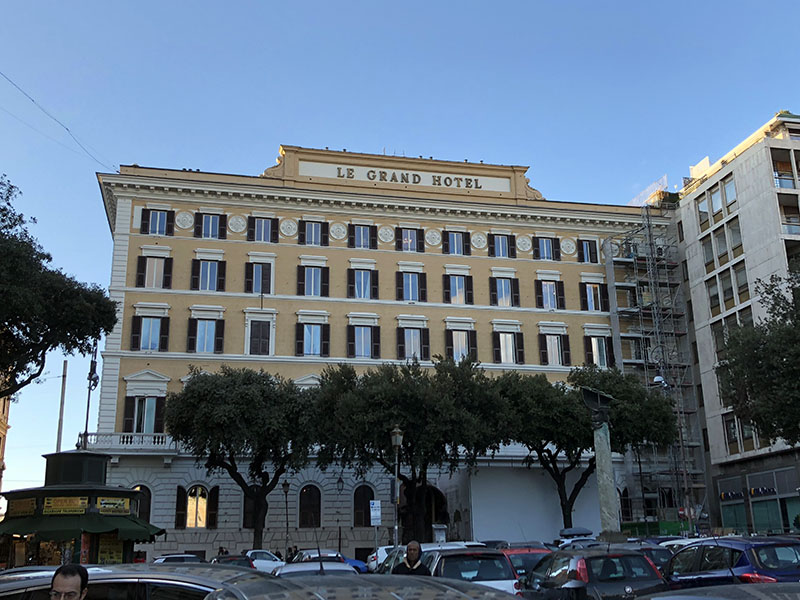 Please note: The lobby was receiving finishing touches while we were there, although the main restaurant was closed and half the rooms were under renovation. The rooms available were still un-renovated, so take that in mind when evaluating my comments. Everything should be complete in the second half of 2018.

People’s sensitivities vary, but I believe the hotel went to great lengths to ensure the renovation never interfered with our stay. Breakfast was served in the lobby bar, and aside from some workers applying copious amounts of gold leaf, the lobby was quiet and almost empty. It’s a stunning space and worth checking out for cocktails, live music, and the nightly sabering ritual if you just want to stop by. I’ll be splitting my photos into two posts. Please read my introduction for more information on the cost of this stay.

The location is a short walk from Termini Station, but the cobblestones can make the walk difficult with luggage. We took a taxi back to the station when we checked out; it was under €5. I originally booked a Superior Room with cash and points and took advantage of an email offer to upgrade to a Deluxe Room, with breakfast included, for an additional EUR 90 per night. Upon arrival at the hotel, the front desk informed us that we would also receive butler service complimentary. (This is a standard benefit only for Imperial Rooms and suites.)

Unfortunately, I had to request a room change after the first night because our location on the first floor (second floor for Americans) was adjacent to the kitchen’s rooftop ventilation fans. All hotels have ventilation fans and ugly views. But I am an extremely light sleeper, and the old windows didn’t seal very well. If there was any chance a different room was available, I wanted it for the remaining three nights. The front desk was kind enough to provide an additional upgrade to a Junior Suite. They cautioned that they didn’t normally rent this room because there was still construction in the courtyard, with scaffolding outside the window. Frankly, all I cared was that it was quiet at night.

The benefit to readers is that I’ll be able to review two different room types. I’ll cover the Deluxe Room today and the Junior Suite in a separate post.

Our deluxe room, as I said, was on the hotels first floor, one level up from the lobby. The receptionist gave us an oral history of the hotel as he walked us there and explained that the ceilings were so high because various nobility used to ride their horses up the staircase and directly to their rooms!

They were certainly some of the tallest ceilings I’ve ever seen, but our room was much more narrow to compensate. At one end, the sofa and desk were fine. A small coffee table had a plate of fruit to welcome us, and there was enough space to move about comfortably. But on the other end of the room, the king-sized bed seemed to barely fit. The small side tables on either end of the bed were so narrow that the alarm clock had to be turned inwards, and the magazines and bottled water were placed on a ledge above the bed. After years of struggling to fit a queen sized bed into some apartments in Seattle, I’ve decided that it’s important to get furniture that fits the space available. This bed was just too big. As I mentioned, a plate of fruit and a welcome letter were waiting for us on the coffee table. The desk had more information about the St. Regis butler service, and the butler himself stopped by a few minutes later to ask if we needed any help. The butler concept is very foreign to us. In theory he’ll help you pack and unpack your luggage, provide pressing services, pick up laundry, and deliver coffee or tea.

My wife and I are glad to take care of things ourselves, and I’d rather get coffee downstairs in the lobby, so I’ve never seen the butler as a selling point. However, we’ve found the butler is useful as a single point of contact for a variety of issues and will often check in on us daily, such as on a previous stay at the St. Regis Bali. There was also a bottle of sparkling wine (2012 Berlucchi Cellarius Brut — a good bottle, I might add) and a full box of amaretti cookies. Turndown service had already come by and delivered some chocolates. They really outdid themselves with the snacks! The bathroom is tucked away by the entrance, where you’ll also find a closet with a large variety of hangers and some luggage stands. There are no kettles or irons in this room because it’s an historic hotel, but we did some laundry during our stay and found the service to be very prompt. Our shirts never looked better. The bathroom had plenty of space around the sink despite only a single vanity, and I appreciated the separate tub and shower. I actually think it was very well designed considering the space constraints. However, since it was taking space away from the bedroom I would have preferred to put it on the opposite wall. That’s the thing about historic hotels — when you’re one of the first to have private bathrooms and electricity, you’re bound to make a few mistakes in the layout that are hard to fix later. Bath products were the typical selection from Remède that you’ll find at all St. Regis hotels. I think they’re good quality with a pleasant smell, although the smell is very strong when first applied. It doesn’t seem to linger very long which is why I still enjoy it. Breakfast was included with our rate, and was actually quite good. Seating was in the lobby bar, while the buffet was set up behind the bar in a large room with a central stove for cooking omelettes and other egg dishes. I enjoyed my omelettes here more than any other hotel during our trip. As for the rest of the buffet, I thought it was a little too large. As for the rest of the buffet, it seemed a little too large given the number of guests in the hotel. Quality counts more than quantity. This was still good, but my wife knows I’m a pastry snob. I have to confess I was happier with the selections at the Gritti Palace and the Park Hyatt Milan. On the other hand, there was a much wider selection of savory items. There was also more opportunity to customize your meal. For example, there were fruit juices, fruit smoothies, and even a smoothie machine with cutting board for you to pick and chop your own produce. I can say that service was top-notch and had a more relaxed style that I see so rarely in Europe. The chef would chat me up each morning and ask how I wanted my eggs, waving me off and saying he would bring them to my table. Our waiter remembered our faces and joked about pressuring us to drink more coffee. It appeared that other guests around us also received less or more formal service to suit their personalities. Though the lobby was just a temporary location, I thought it was a pleasant place to eat each morning.

I’ll leave my verdict on the entire hotel for my second post, reviewing the Junior Suite. However, let me say that I’m not convinced the Deluxe Room is a worthwhile upgrade. The narrow layout of the room made it feel claustrophobic despite the insanely high ceilings. I would have preferred a more square layout. If you do get the opportunity to stay at this hotel I recommend either the standard Superior Room or a further upgrade to an Imperial Room.