I recently stayed at The New York Edition Hotel.  The Edition is a new brand from Marriott that has locations in London, Miami Beach, and New York, with at least 12 more locations on the way. It’s meant to be a unique upscale boutique brand.

My reasons for trying out The New York Edition were multiple: Cash rates for hotels when I needed a stay were absurd (even more absurd than normal Manhattan prices). Cash & Points rates, my normal method of booking rooms in Manhattan, just weren’t available.

The New York Edition is considered a Ritz-Carlton Tier 3 property, and so was available for 40,000 points one night (on Points Saver) and 50,000 points for another. That’s an average of 15,000 Starwood points per night.

Cash rates for the hotel were going for $550+ per night, so one could say I got about 1.4 cents of value out of my Marriott points, or 4.2 cents out of my Starwood points.

The negative aspect of booking a hotel like The New York Edition (or other Edition brands) is that many Marriott Gold or Platinum status benefits do not apply. For example, you don’t get a guaranteed room type. Since there is no lounge, you don’t get free breakfast. If you have Platinum status, you won’t receive an arrival gift.

However, I did receive a 4pm late checkout on my final day, and wi-fi is free for all guests and was pretty speedy. I was also able to benefit from a small upgrade, which gave me a corner deluxe room that gave me views on two sides.

On this trip, I wasn’t worried about breakfast because it was already kind of a “foodie” trip where I was eating out with friends and family for meals. Instead of going to a hotel breakfast, I went to the hotel gym. However, it’s worth keeping in mind if you’re looking for a hotel with lounge access or breakfast.

The New York Edition is located at the corner of 24th Street and Madison Avenue, with the entrance on 24th Street. The building is actually a clock tower which used to house the Metropolitan Life Insurance Company.

Frankly, I love this location, It’s right at the beginning of Madison Avenue, so there’s not as much traffic going uptown. It’s right across the street from Madison Square Park as well as the Flatiron Building. It’s near multiple subway stations, including the 23rd street 6 station, N/R/W stations, and PATH station. It’s only a block away from Eataly. During my stay, I was able to walk to both Herald Square (uptown) and the East Village (downtown) within 10 minutes each. On my walks back to the hotel at night, I got gorgeous views of the tower as well as the Empire State Building.

Lastly, it doesn’t have the tourist vibe that other Midtown hotels give off. Don’t get me wrong, there were plenty of tourists at the hotel (mainly from Europe or L.A., from what I could gather), but the area didn’t exude touristy vibes. I’ve never actually properly lived in New York City, but I’ve visited over 30 times in the past 5 years, so I consider myself a “traveling local” of Manhattan. Of all the places I’ve stayed in the borough, the New York Edition easily had my favorite location.

I used Uber to ride from LaGuardia Airport to The Edition (surge pricing meant it was around $60, but the 20-minute ride with little traffic was free thanks to the Amex $65 offer). As soon I exited the car, a door man came out and grabbed my carryon bag for me and welcomed me to the hotel. Since I was traveling light, I didn’t need much help getting to my room, but he kept my bag with him while I went to go check in – I thought that was nice.

When you enter the lobby of The New York Edition, the check-in area is on the left, while the right side features The Lobby Bar and its surroundings. It feels tres chic. 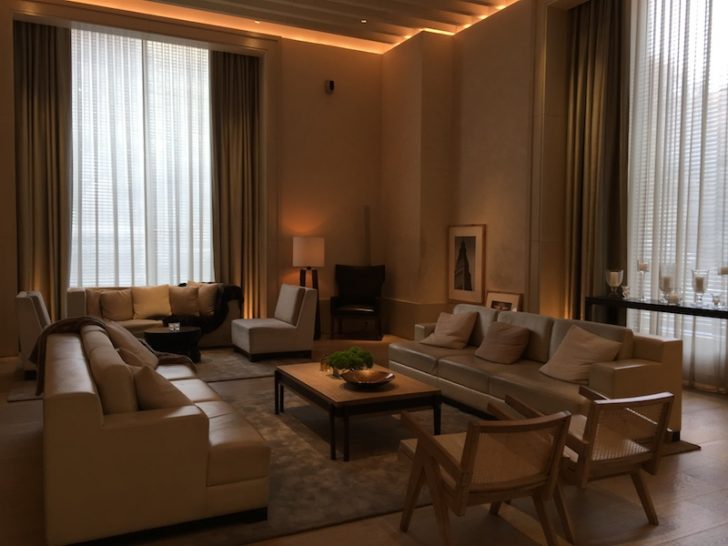 On the 2nd floor, there’s The Gold Bar and the hotel restaurant, the Clock Tower. Keep in mind, there are absolutely no benefits provided to those with elite status at any of these, so I didn’t grab a drink or food at any of these. I mean, why would I when I’m across the street from Shake Shack?? Here are some pictures though: The elevators have the same system seen in many skyscrapers, where you scan your room key to unlock the display and enter your floor number while in the lobby; the system then assigns you to an elevator. This made getting to and from my room very fast compared to other tall hotels.  I can’t count the number of times I’ve been assigned a room on a high floor in other hotels only to spend 5-10 minutes dealing with the elevator.

My room number was 2107 – it was a corner room with windows that faced south toward lower Manhattan and east toward Brooklyn.  There was a small entryway with 2 closets, entrance to the bathroom, and entrance to the main room.

The main room had a small sofa with a table, as well as a bench on the other side. The bed was comfortable, and even had a fur blanket splayed out over the edge (though it wasn’t that warm). The windows had heavy curtains which kept light out in the mornings, and I didn’t hear too much noise from the 21st floor. That being said, it was a quiet weekend for the city.

The bedside tables had a simple alarm clock as well as Beats Pill audio player, which would be useful if you wanted to play music from your bluetooth device anywhere in the hotel room (including the bathroom). Only one side of the bed had plugs with USB ports, but they didn’t work, which was disappointing. At night, I received turndown service with 2 small water bottles.

The entryway had 2 closets, which included a minibar with overpriced snacks. They came with 2 bathrobes, both of which had “hoodies” on them, which I hadn’t seen at a hotel before! How millennial of them. Of note, the hotel also provides complimentary shoeshines but I did not use this.

The TV also had a telescoping arm, making it easy to watch from both the bed, as well as the sofa. One thing I appreciated was the easy access to Netflix and Hulu Plus, which is common at other Marriott properties.  I was able to catch up on my shows through my own account.

The bathroom and shower were quite large by New York City standards. One thing that weirded me out were the two large windows, which were in view of other buildings of similar height. I would definitely close the blinds before you use the facilities. One great thing was the fact that the bathroom was actually private with an actual door with an actual lock, which isn’t always the case with many new hotels.

The hotel uses Le Labo amenities – these are becoming some of my favorites, as I’ve seen them here, at the Park Hyatt New York, and even on Etihad’s A380 First Class shower. I even mentioned my affinity for Le Labo to the reception when I went down my last day to request a late checkout — the housekeeping staff gave me an extra set to take home with me!

The hotel gym and spa are on the 39th floor. The gym is small and window-less, but it was never crowded during my stay. It includes free weights, some resistance machines, a few bikes, ellipticals, and treadmills. It is open 24 hours per day, and stocked with water, towels, fitness mats, and headphones.

I enjoyed my stay at The New York Edition. The location is perfect and the staff I interacted with (mainly door greeters and front desk) were friendly and helpful. You won’t get many benefits of Marriott status here, but considering that I received Marriott Gold because of my Starwood SPG Gold status, I got just as much as I would have at a Starwood property that would have cost much more points for a similar experience.

If you are swimming in SPG points, are looking for a place to stay in Manhattan, and don’t care too much for suites or breakfast, I would definitely recommend the New York Edition. If you absolutely need to have all the benefits of status, I’d look elsewhere.