Vietnam Airlines flies between Ho Chi Minh City (Saigon) and Singapore several times daily. I flew on VN 650 departing Singapore at 1:15pm in the afternoon in economy class. Vietnam Airlines uses an older regional A321 for this route. The old a321 is really showing its age. Despite the old plane, the airlines Skytrax 4 star service really shines. Flight attendants are very friendly and they never sit down. From the minute the seat belt sign came off to the final approach in Saigon, the flight attendants were busy working, ensuring everyone’s flight was enjoyable.

Boarding was very efficient and I found myself in the very back of the aircraft next to a family of five. Thankfully, one was a lap child and slept nearly the entire flight on her mom’s lap. This meant I had an open seat next to me the entire flight. Suddenly, 43A didn’t seem that bad! The seat was very basic and paddling was thin. There is no in-seat power or real entertainment. There are overhead TVs, but no sound. No wifi, nothing. Thankfully, I had my own book to read so I wasn’t without. The seat is not comfortable. It is to thin, lacking padding, and has no head rest.  Then again, this flight is not long! However, despite my complaints, I found the legroom to be quite nice for a guy of my size (5’10” &170lbs). We took off very quickly and with an on-time departure we were heading to Vietnam. I could barely hold back my excitement! My first time on Vietnam Airlines and my first time back to Vietnam in 10 years!

Once we made it to about 10,000 feet the seat belt sign was off and within 15 minutes service began. Flight attendants started to serve the cabin from front to back. First, each passenger in economy was given the option of Beef or Fish. As I am not a big beef fan, it was fish for me. The fish was bland, but not overcooked or dry. 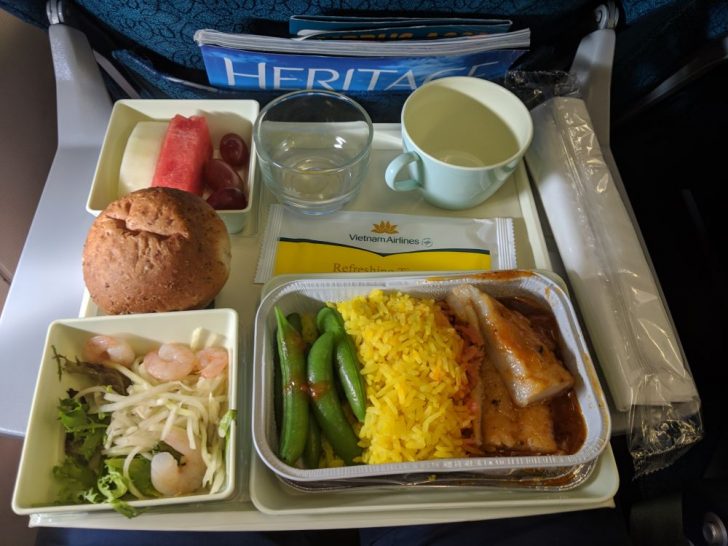 Upon be served I was surprised to find decent plastic china. Everything was actually plated, not just a snack box. The service was all done at once and even included a wine glass and coffee cup! Remember, the French had an influence on Vietnam back in the day. That still shines through in their food and wine! I opted for beer, but was nevertheless impress with real glassware in economy.

Once lunch service was done, each flight attendant brought out coffee and tea. Tea, coffee, both? Drink up for free; Vietnam Airlines is not a low cost carrier! By the time meal service was done, we were starting our descent into Saigon!  Finally, we were here!