Today Boeing revealed their newest 747-8F cargo test aircraft in a brand new never before seen Seahawks 12th man livery. Thrilling fans, AvGeeks, and everyone in-between the 12th man LOUDER Seahawks jet is unlike any other! The NFL loudest fans now have their own JET!

As a Seattle Seahawks sponsor, the company is giving the Super Bowl contenders a high flying 12th man that no other team can say they have — their own 747-8! From sea level on the Puget Sound to 30,000 feet, people & companies all over this nation will be screaming for the Seahawks louder than ever this Sunday, cheering on our Seattle Seahawks! 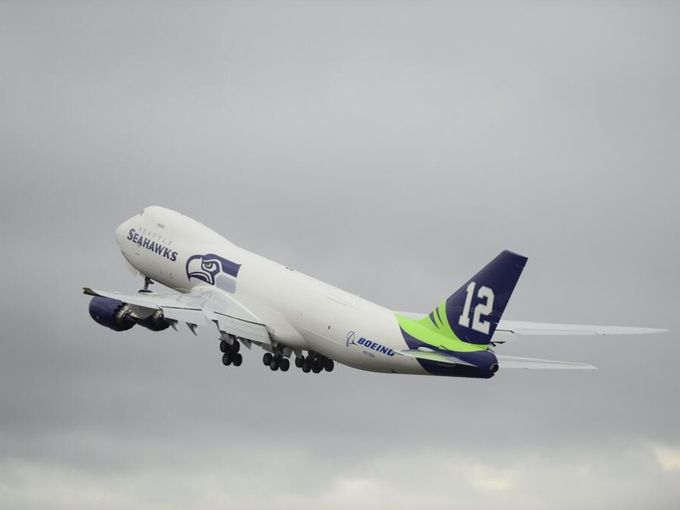 The USA Today posted these photos along with a full story outlining the plane and the Boeing / Seahawks Sponsorship. You can read the whole story, but here are a few tidbits:

Boeing is a sponsor of the Seattle Seahawks and says it “has partnered with the team for more than a decade on programs in the Puget Sound area.”

“The Seahawks have been an inspiration to our entire community throughout this incredible season,” Ray Conner, Boeing Commercial Airplanes CEO, says in a statement describing the special aircraft. “We’re honored that we could join together two Northwest icons, the Seahawks and the 747, for this special salute from the entire Boeing team.”

“The 747 team is proud that one of our airplanes could be used as a tribute to the Seahawks’ success this season and a rallying cry for the team as they prepare for the Super Bowl,” Eric Lindblad, VP and general manager of Boeing’s 747 program, adds in the statement. “The partnerships we have with the Seahawks and others are making a positive difference in the communities where Boeing employees live and work. We join with all Seahawks fans in wishing the team success on Sunday.” For those of you who don’t know, I am from Seattle, my family works for Boeing, and we are TRUE FANS! GO HAWKS!

The plane took off from Boeing Field in Seattle in route to Paine Field in Everette, WA but first drew a 12 over washington state!