I wrote yesterday about my first stay at a Hyatt Place. A few misses but lots of hits. I’ve stayed at a four other budget hotels since then, which have convinced me there isn’t much serious competition to Hyatt Place. Quality just seems to suffer so much at most of these properties, which may be trying to do too much. While I complained about the lack of a hot breakfast at the Hyatt Place PDX, at least what they offered was good and a separate hot breakfast was available for sale. Greater attention could then be paid toward the rooms, which are the real reason people need a hotel. This approach turned out better than what I faced at two other Oregon hotels, although the situation improved a bit in Missouri (read about that on Friday).

Saturday we detoured to the Oregon coast to see Cannon Beach and Tillamook before heading back to I-5 and down to Grants Pass. We were going to stay with my aunt, but plans changed at the last minute and I was able to score a free night using points at the Holiday Inn Express (it was the same weekend as the Boatnik speedboat races, and most places were sold out). Otherwise it probably would have cost about $150 given the capacity issues. This is when it pays to have some Priority Club points sitting in your account. You never know when you’ll be on a road trip and need a quick hotel stay. There’s usually a Holiday Inn nearby.

It was a complete and total zoo. Sharing the pool with the Best Western next door meant there were kids and parents running across the parking lot as we tried to drive in. The hotel appeared to be staffed by a single sorry-looking teenager who was trying to deliver clean towels, respond to complaints, and check people in all at once. We waited 10 minutes for her to show up, at which point I got a cute little Platinum welcome amenity and keys to what turned out to be an upgrade to a corner suite. 😀 Except the keys didn’t work the first time, so I had to go back to the front desk, wait another 10 minutes, and have her make new ones. 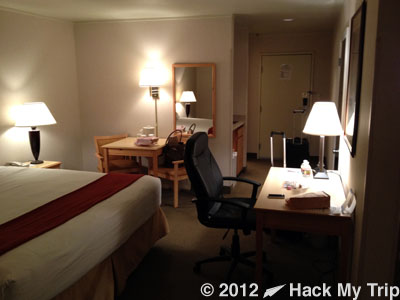 A suite at a Holiday Inn (especially the older ones) really isn’t much to write home about. It was basically an extra large room wrapped around the fire escape. We never used the living room since we were so tired and it was late. The shower tub was also larger and doubled as a Jacuzzi, but Megan wasn’t very keen on testing it out. Its appearance didn’t exactly encourage a relaxing soak. 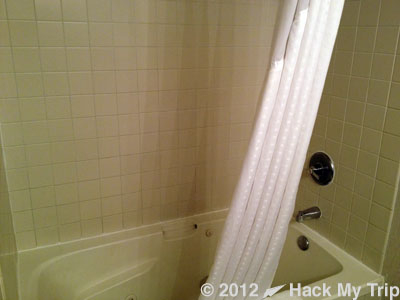 We did stop for breakfast, and it was the usual Holiday Inn pseudo food that makes McDonalds seem appetizing. My mouth usually puckers for a few hours afterward due to all the salt, and I begin to wonder if prisons have better quality. I really wish they had a waffle maker because the automated pancake machine churns out disks of rubber, and those cinnamon rolls look like diabetes waiting to happen. I chose some eggs and ham with a healthy dose of salsa packets. By that point, there were about 20 people standing and waiting for tables (I think the room was already well beyond capacity), so we made our way out and saw some sights in Medford before returning for the boat races.

Later that day, we drove back north to PDX on Sunday, staying at the Country Inn & Suites to take advantage of one of Club Carlson’s bonus point promotions before returning to Seattle on Monday. We stayed at the Radisson PDX on a trip last year, and both hotels are in the same general area, in the older previously developed area around the backside of the airport. It’s hard to figure out where you’re going back there unless you are a local, but we found it and checked in with time to get ready before heading back out for dinner.

The hotel looked fine from the outside, with the lush vegetation more typical of Oregon, and it seemed surprisingly crowded given what I remembered of the Radisson. It could be that people were stopping before flying out as they were advertising an airport parking deal. A full parking lot does not mean a full hotel. Inside the hotel, I was surprised to find that they still had paper reservation records, but at least there was no problem getting the free Starbucks gift card that came with my “Java Rate.” (For $5 more I got a $10 gift card. It pays to scroll down through all your rate options on the hotel website). The room was certainly more traditional than the Hyatt Place just a mile away, smaller in size with furniture that was reminiscent of the ‘80s. Megan complained that it was stuffy and humid (it was), and placing the sink outside the bathroom was a poor design choice. (The Hyatt Place did this, too, but it seemed more separate from the rest of the room. All that space helped.) Also, as a note to other budget hotels, installing a massive 500-nozzel showerhead does not create a luxury experience in what is otherwise a very average hotel room. What I can say is that the room was otherwise very comfortable, and I enjoyed it better than the Holiday Inn Express. The chairs and bed were clean and well cushioned. I just wish we could crack a window to get some fresh air. Except it was noisy. Remember how I said the approaching jets made no sound at the Hyatt Place? Well here you have to listen to planes take off, and you hear every one of them. Fortunately there aren’t too many early in the morning at PDX. The Radisson a few blocks away is about the same price, and if I didn’t care about the free breakfast (my mistake), I would probably stay there instead.

A note about breakfast. It was by far one of the worst ones I’ve had at a hotel. Yes, it was free, but if we hadn’t been in a rush to get home I think I would have just gone to an IHOP instead. The eggs were surprisingly decent, but half of the food trays were empty, dirty dishes and silverware were everywhere, Megan had to throw out her coffee because her glass tasted like soap, and in general chaos reigned. We made good use of that Starbucks gift card. 🙁