Far Northern California, once you get north of the Bay Area’s exurbs, is largely a collection of small towns interspersed amongst some of the most spectacular natural beauty you’ll find anywhere.  The bucolic, rural character of the area is a throwback to the idyllic California of yesteryear, and that includes some unique, historic boutique hotels and bed & breakfasts.  We found one such interesting looking place right along our route through the redwoods, and conveniently located based on our sightseeing schedule at that – the Historic Requa Inn, along the banks of the Klamath River about 20 miles south of Crescent City.  I’m a sucker for historic inns to begin with, but the riverside setting among the mountains and big trees seemed like a really cool way to spend a night on our long drive.

Note: this is part of my trip report series about our trip to California in May.  Click here for the trip report index and introductory post. 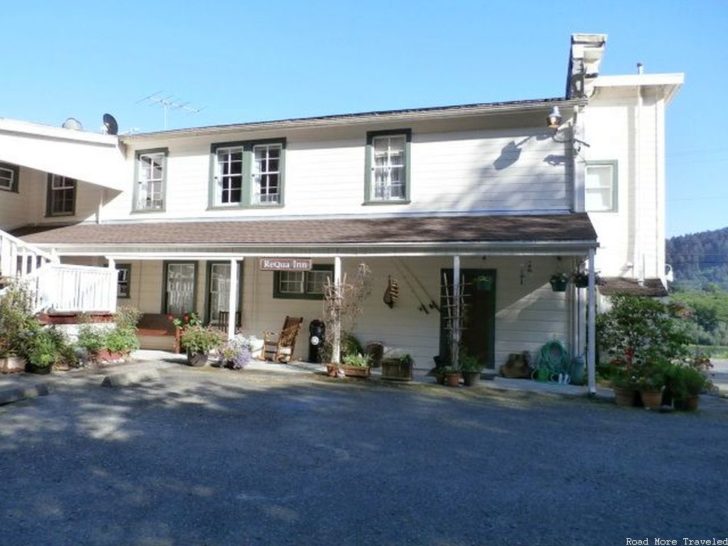 First off, as the bullet points note, the inn has no TV and no phones in the room.  Plus WiFi which the hotel itself describes as “not very fast or reliable”, and with bandwidth limitations.  That’s because you’re literally in the middle of nowhere, not necessarily a bad thing.  In other words, this is the type of place you go to escape from the world for a few days.  If you need to conduct business, or you absolutely have to binge watch NCIS reruns after dinner, this isn’t the place for you.

The #1 selling point of the Requa Inn is the solitude and natural setting.  And a pretty darned awesome one it is, with the hotel basically fronting the Klamath River across the road.  You’re just a couple of miles down the road from the incredible Klamath River Overlook, where you can look down on the mouth of the Klamath River as it empties into the Pacific. One potential downside to the remote location is the lack of services in the area.  There is a gas station and Indian casino in Klamath, a few miles to the south, but the only restaurant I noticed was a diner that closes at 4 pm.  Trees of Mystery, a few miles north, also has a restaurant on-site open seasonally, but I’ve heard not very good things about it.  If you need options, you’ll have to make the haul up to Crescent City.  It’s about half an hour due to the winding, scenic nature of Highway 101 along the way.  There are also a few restaurants (including a quite good diner which I’ll talk about in a future post) in Orick, 24 miles to the south.

There’s also a garden tucked into the mountainside out back.  Supposedly, the hot tub is somewhere out here, though I didn’t spend any time looking for it. There are also several cats roaming around outside, a couple of which are friendly.  One tuxedo cat, a big boy, even wanted to bond with mom. 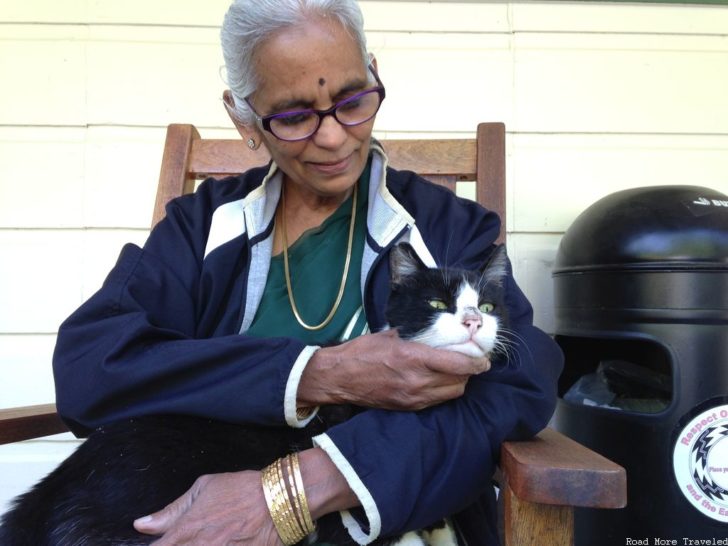 According to the front desk clerk, the hotel’s owners try their best to “trap/neuter/release” the strays.  They’re free otherwise to roam the hotel grounds, and they leave food for them.  Always a good sign when the hotel owner is a cat lover!

The inn occupies two levels, with a simple layout.  Lobby, front desk, and restaurant downstairs, and guest rooms upstairs.  As you may have surmised from the photo up top, the inn is a historic building, built in 1914 with solid redwood from the area.  The lobby features kind of an odd mix of antiques, like the wall clock and a couch in one corner, and newer leather couches that look like they came from Haverty’s (I should know, my mom has a brown leather couch that looks just like the ones below that we bought at – Haverty’s). The fireplace is a nice spot to sit in front of in the evenings, especially given that it gets pretty cold up here at night, even in summer.  Clear skies dropped lows into the upper 40s the night of our stay.  There is also a small library downstairs where you can borrow a book to read if you get bored (sorry for the poor picture quality). As mentioned, all guest rooms are upstairs, which can be accessed either via a staircase from the lobby, or one from the parking lot outside which leads directly to the second floor.  If you have a lot of heavy bags, prepare for a workout.  The upstairs has more of a “period” feel to it, with a look reminiscent to what you may have found in an early-20th century rural house. This is a cozy inn, consisting of 13 rooms in the main building, along with 3 larger cottages off-site.  As you’ll often find at country inns or bed & breakfasts, each room has its own name.  We booked “Rhododendron” and “Emerald Ridge”, two rooms in the southwest corner of the inn facing the river.  My wife and I stayed in Rhododendron, the corner room.  This room, like most at the inn, is small, but charming.  It features an antique bed, and wallpaper believed to be the original used when the inn was built in 1914. If you need juice for your electronic devices, there is power outlet by the chairs next to the lamp.  However, as I noted in the intro, because of the remote location, there’s no cell phone service.  While the WiFi was perhaps not as bad as the hotel’s own website suggests, it was a little slow.  It also randomly crapped out a couple of times during our stay, coming back online maybe an hour or so later.  In other words, don’t expect to be able to conduct business.  Though with a view like this from the room, why would you? The website does warn of road noise during summer, but I didn’t notice it being particularly bothersome.  Then again, we were just outside of the main tourist season.  It may be more of an issue in July and August.

The innkeeper also leaves a bottle of wine in each room, which you can purchase and take with you.  It looked pretty decent, but seeing as I can’t finish an entire bottle myself, and we didn’t have a proper carrier to get it home, I decided to pass. The bathroom in this room is really tight, but features a real throwback, a claw foot tub.  Sister Sky, a Native American-owned business based in Spokane, Washington, sources the amenities, which utilize traditional herbs and grasses as ingredients. If you’re a child of the 80s like me, you’ll also appreciate the “Goonies”-themed memorabilia throughout the top floor, including a few DVDs of the original movie that you can borrow and watch on your own device.  While I very much appreciate The Goonies theme, I also found it just a bit odd.  The actual setting of the movie was Astoria, Oregon, more than 300 miles up the road.

The hotel provides breakfast every morning in the restaurant downstairs from 8-10 during the summer, and 8-9 during the winter.  Fresh coffee is available beginning at 7 am.  That is something you should keep in mind when staying at a bed & breakfast – actual breakfast hours are usually restricted to a short window.  I’m not a morning person at all, so an 8 am start doesn’t bother me one bit.  If you’re an early bird, though, well, you might have a problem.  The dining room is airy and spacious, with plenty of natural light from the windows facing the river.  Larger tables are set up in the center, with smaller tables along the sides and in the corners. There are also a couple of cool antique pieces in the dining room, including a wood burning stove and a piano. The menu itself is pretty simple: eggs to order, bacon, sausage, pancakes, bagels with lox and cream cheese, cream of wheat, toast, and yogurt.  You can also order a “green smoothie”, orange juice, espresso, or a mimosa in addition to unlimited tea and coffee.  Technically, each guest receives a voucher for $10 towards breakfast.  You can mix and match items to use that up as you see fit.  In practice, the $10 limit appears to be rather loosely enforced.  We technically went a little over between the three of us, but we weren’t charged.  I thought I took a couple of pictures of the spread, but I can’t find them.

In any event, everything we had was tasty.  The server did seem a little absent-minded, bringing the wrong dish for my wife and forgetting the half and half that my mom had asked for.  But she was very nice, and even joked around with another couple about her forgetfulness.

The restaurant also serves a prix fixe, family-style dinner Wednesdays through Sundays from March through October at 7 pm, for $38 per person.  Reservations are required at least one day in advance.  We weren’t sure if we’d make it in time and so didn’t take advantage, but the menu looked pretty good.

One thing you should definitely be aware of – check-in is from 4-8 pm; nobody staffs the check-in desk outside of the times.  If you plan on arriving late, make sure to call ahead.  Again, this is pretty typical of bed & breakfasts, but this can be a trap for the unwary.

Service-wise, everyone we encountered was warm and hospitable, as you would expect at a small town country inn.  A good example was at breakfast, when a woman that I presume was the innkeeper walked around from table to table greeting guests, and wanted to make sure my wife was comfortable and had enough to eat since she was eating for two.  It’s little things like that you really appreciate.

I’m a sucker for historic hotels and actively look for places to decompress for a couple of days.  I found the Requa Inn perfect in that regard.  You really have no choice but to disconnect and enjoy nature and time with friends and family here, since it’s so remote.  I love it, but also recognize this type of vacation isn’t for everyone.  Just understand what you’re getting before you plan a stay. And make sure everyone in the crew will enjoy being off the grid.

Next week, we take a walk on the wild side at Great Cats World Park, a big cat sanctuary just across the border in Oregon.