Our journey to Helsinki airport was a bit of a disaster that morning, given that the signage to the Helsinki Rail Line was very confusing, poorly marked and difficult to navigate at that hour in the morning (around 5 AM). We were sprinting to our train and they pulled away just as we were getting there. I hate to sound crabby, but it was honestly a very real representation of how frustrating I found Finland as a visitor and didn’t leave a good taste in my mouth.

We wound up having to take a rather expensive cab to Vantaa airport, and then proceeded to the check-in areas. The line for check-in at the KLM desks were very long at that hour.

That being said, I did appreciate Vantaa as a cool airport. You’ll see a ton of Airbus A350 planes since this is a Finnair hub, and they were one of the first recipients of the A350. We visited the Aspire lounge at HEL, and then proceeded to our gate for our KLM flight to Amsterdam. The passenger make up of this flight was really neat since Amsterdam is a mega-connecting hub for passengers headed to all corners of the earth, including Africa, the Middle East, the U.S. And parts of Asia. I noticed a large proportion of African travelers headed to various destinations over Amsterdam, which enthralled me. I love the little things in life.

One of the cool features of KLM (if you’re up for it) is you can sync your social media accounts to your flight, or even imbed your linkedin profile so that you are able to “network” on your flight, if so desired. I booked these flights (J class flying HEL-AMS-LHR-ATL) using Delta miles, and I was able to unlock this feature while selecting seats on the KLM website. 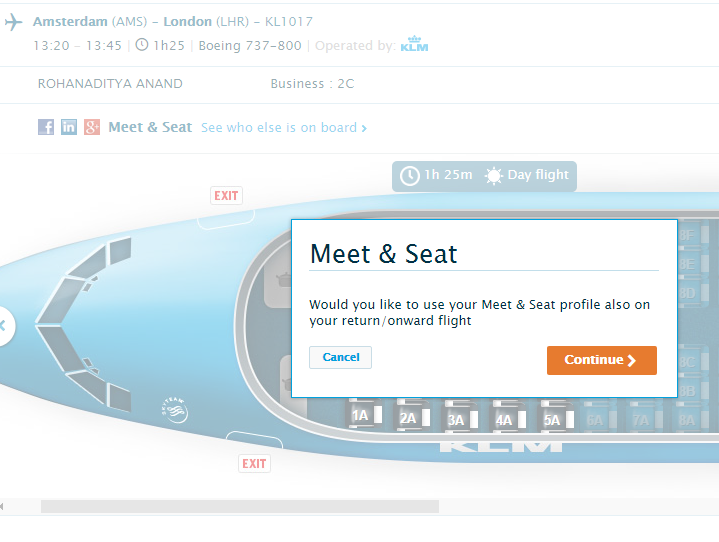 This may not be everryone’s cup of tea, and may even be considered a bit too invasive, but I thought I’d give it a try when I was booking. That said, it didn’t seem to matter much because I don’t think I even remembered doing it when I made the seat selections, much less on board the plane when I was flying home.

KLM short-haul business class within Europe is similar to the same procedure that other large European network carriers use: the seats are the same in the premium cabin as they are in the main cabin, but the center seats are blocked.

On KLM, I was flying a 737-900ER from Helsinki to Amsterdam and a 737-800 from Amsterdam to London Heathrow. Both flights were packed.

The flight attendants on both sectors were just absolutely delightful.O On the first leg, they were mostly, “business” but still delivered their service with a smile. On the second leg, they were a bit more friendly and chatty, but I cannot say enough positive things about them.

Newspapers are offered on the ground, but no pre-departure beverages are provided.

Shortly after wheels are up, we were offered breakfast on the HEL-AMS leg. We had a choice between blueberrry crepes and eggs. I initially went for the crepes and this is what I received: The crepes were phenomenal: they came with a delicious blueberry and almond compote, and on the side, there was a cheese, date and walnut appetizer. The fruit was fresh and a nice little mint garnish. The croissant was hot and fresh and ame with the accompaniments of marmelade and butter, as contained in the little blue box.

I was very intrigued to try the egg dish as well, and the flight attendant happily obliged! Although I forgot to get a picture, it was a scramble dish with some cheese and roasted potatoes. It was also fantastic! The coffee on KLM is delicious, also, and their orange juice tastes fresh-squeezed!

On the Amsterdam to London Heathrow leg, we were given finger sandwiches, crisps, an edamame salad with salmon! I almost was about to confuse it with Poke. We also received a chocolate mousse. Guys, this is a 45 minute flight, mind you! The flights passed uneventfully. I had incredible views outside my window as it was a gorgeous day of flying.

There is no in-flight entertainment system enabled on most KLM aircraft, at least to my knowledge. There was WiFi, but I wasn’t really all that interested in purchasing it. I was most interested in the exterior views, watching the scenery outside, sleeping a bit and enjoying the KLM hospitality. The coolest thing about approaches into Amsterdam is that you see all of the contrails and the various KLM aircraft darting into Schiphol airport. The approach is one of the best, in my opinion, just because the countryside is so gorgeous.

Layovers in Amsterdam are also great because you can lock your stuff into a storage locker, buy a ticket on the train and be in the city within 15 minutes. If you can’t leave the airport, then you can enjoy the observation deck or you can tour an old Fokker.

It is truly a lovely airport to pass through.

I’ve flown KLM four times now, and they have always been my favorite airline. There is something about KLM that just embodies a love for aviation, flying and the passenger experience. Maybe it is because it is one of the oldest airlines in the world, or because it is so iconic and important to Holland, but I really just feel like I’m alive and a kid again when I’m traveling on KLM. I’ve only taken them short-haul business and economy, and long-haul economy, but I am excited to try them long-haul in premium some day…hopefully.