The Frequent Travelers University ended late, so I booked my return flight for the following day with plans to see a friend living in the area. My original hotel, the Hyatt Alexandria, is a fine property but oriented toward business travelers and surrounded by office towers. I decided to find something with a little more character, something that Kimpton tends to excel at. 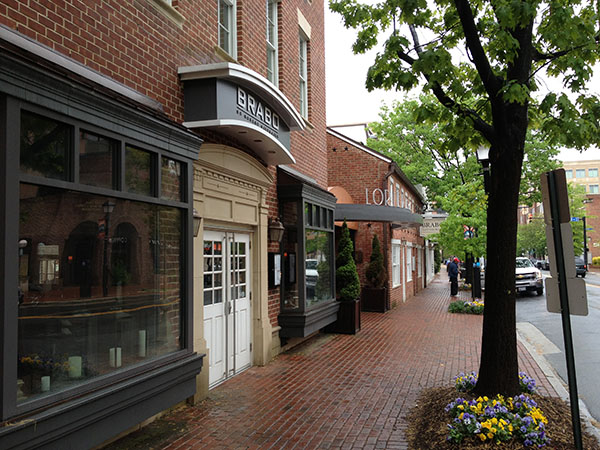 Kimpton’s Lorien Hotel & Spa in Old Town, a couple stops further south on the Metro, was actually $20 cheaper and earned me a second stay toward the three I need to unlock the six free nights I earn as a member of Kimpton’s Inner Circle. (FYI: All three of Kimpton’s hotels in Alexandria make the top five list on Trip Advisor. It’s ratings aren’t perfect, but they are often more right than wrong.)

Check-in was a breeze, and I was upgraded from a standard room with one queen bed to a Lorien Suite, with a separate living room and a giant bathroom. There are several of these suites throughout the hotel, so I think the odds of an upgrade for Inner Circle members is quite good. Let’s start with the bedroom, my favorite room in the suite. The lamplight in the evening was warm and the natural light in the morning was more than sufficient. I liked the light blue walls, white furnishings, and comfortable easy chair. It even had a soft, woven blanket if I had wanted to curl up with a book. Venetian blinds on the windows were high quality and more tasteful than drapes. Blackout drapes were still provided if, like me, you are sensitive to any light when trying to sleep, though an ottoman right below the window made them difficult to close.

The bathroom really drove home the contemporary design of the hotel, which attempted to add a modern edge to the comfortable, plush style like I saw in my bedroom. There was a significant amount of marble with a concrete countertop. Megan would have loved that countertop. Click here if you want to learn more about other eye-pleasing countertops. I appreciated that even though it was one big room, it was very effectively partitioned to create separate areas for the toilet, sink, shower, and claw foot tub. Nothing was squeezed together. Enough space between the shower and tub, as well as a lip running down the middle of the room, meant water from the open shower did not create a mess everywhere else. Amenities were provided by C.O. Bigelow, which I recall from my stay at the Andaz Wall Street. They are nice, but the scent is not for me. Yes, I did take a soak in the tub. 😉 It was fairly spacious for a large guy like me. Most hotel tubs are far too small. But it took forever to fill! A low-flow faucet makes sense for showers and sinks — you just need to get wet. But a tub is not about saving water and should have a more robust delivery system.

Despite the tub, my only real complaint about the suite was that the living room was severely under-lit. I understand the bedroom and bathroom are the focus of many suites, but living rooms are often overlooked. That extra space is wasted if I find myself preferring to lounge on the bed where the surroundings are nicer. Rather than the size of the room, how it’s laid out and furnished matter more when creating a comfortable stay.

For example, my particular living room did not have any windows. This would not normally be a problem by itself. But the only lighting were a few fluorescent lamps emitting very cool light. This did not work well with the already blue-tinted walls. It was like being inside a dark ice cube, albeit one with very comfortable furniture. Switch out the bulbs for halogens and I think it would be just fine. Besides a couch, chair, and some nice flowers, there was also a desk and not just Internet access but an actual computer. But first, I had to wade through all the food they left for my welcome amenity. (I was offered a free glass of wine at check in, too, even though I’d missed the usual manager’s wine reception.) I continue to get far more food than I need for just myself during a one-night stay and felt a little guilty leaving half of it uneaten. However, my next stay will be three nights in Miami with Megan. I think we’ll finally be able to make good use of that particular benefit. 😉 As a “hotel and spa” the Lorien is a bit different from other Kimptons. For example, there are no animal print bathrobes, just standard white ones. I did not utilize the spa services on my short stay, but the amenities on the ground floor seemed more welcoming than I have seen elsewhere. There was an inner courtyard with tables and chairs, a small “library” style sitting area off the lobby, and even an outdoor fire pit. I went out there for about an hour to work on the blog, and it was still a little chilly. In retrospect I should have brought that blanket from my room. I have heard that Brabo, a restaurant attached to the Lorien, is one of the best in Old Town. My friend and I did not eat there since we were looking for something more casual. Instead, we ate at the Brabo Tasting Room next door, which does not take reservations. The food was fantastic: I had a beer and one of the best meatball sandwiches ever.

Despite dozens of trips to Washington, DC, and even a three-month internship, I had never been to Old Town Alexandria before and was excited about the opportunity. Sadly, it rained most of Monday. I still took a quick walk to the waterfront and stopped in a coffee shop for breakfast. This small town probably wouldn’t hold my attention for more than a day, but it could still make for a nice base when visiting the city if you were willing to tolerate the extra commute. To explore the rest, I’ll have to come back with Megan some time and get a better look. It was charming to see an example of early American colonialism without all the monuments and office towers I’ve seen in places like Washington, New York, Boston, or Philadelphia. We don’t get a whole lot of that out West, where “old” things were built in the 1970s, not the 1770s!