This was the last leg from my mileage run to Singapore.  It was part of a 17,000 mileage run I did in November to qualify for United Airlines Premier Gold status.  You can read about the anatomy of my United mileage run here.

Other reports from this series:

In short, it was a whirlwind 3 day trip, traveling to three different countries and over 17,000 miles. It was a little crazy but luckily, I had two other crazy guys join me on the trip so it turned out to be an amazing time and a great bonding experience.  But as fun as it was, I was definitely looking forward to coming home and this United Airlines Boeing 787-8 would be my chariot ride home.

Now, I know I have been pretty hard on United Airlines lately.  Their outdated planes, horrible customer service and my overall negative experiences have all been good enough reasons for me to complain and never recommend them to anyone.  But truth be told, I have never flown on United Airlines economy class for a long haul flight. Feeling a little hypocritical, I decided to try out their long haul product so that I could give them a fair shake. I mean, I recently flew their BusinessFirst product from Frankfurt to San Francisco and was pleasantly surprised. What if this was the flight that would change my mind about United Airlines economy class? What if I had been wrong all this time and have been giving bad advice?? Well, there was only one way to find out so I bit the bullet and booked a flight. Spoiler alert, I wasn’t wrong.

I started off my trip with a visit to the Narita United Club lounge.  The lounge was nice and had a good selection of food and drinks.  However, the lounge was super crowded, hot and the WiFi was excruciatingly slow. Frustrated, I walked over to the Korean Air lounge to get some tablespace and some work done.  You can read my review of the United Club here and my review of the Korean Air lounge here.

About an hour prior to departure, I made my way to gate 38 to take some pictures of the Boeing 787-8 Dreamliner and prepared for boarding. I knew it was a little early but I wasn’t sure if there would be a secondary inspection or not. Most flights returning back to the US have a secondary inspection at the gate and I wanted to give it extra time. Luckily, there wasn’t one in this case. Instead of walking back to the United Club, I just took a seat at the gate and watched the gate lice form.  Boarding began 50 minutes prior to departure time and it was chaotic as usual. After Global Services, business class and Star Alliance Gold members, I finally boarded the 787 through door L2 and sadly, turned right instead of left. Walking past the business class cabin and the forward Economy Plus cabin, I found my seat in row 27 of the main economy class cabin.

United Airlines 787s feature a quieter cabin, LED mood lighting and larger windows and overhead bins. The windows are 30 percent larger than traditional windows and are electronically controlled. No more plastic window shades here. The bathrooms are also bigger and are equipped with automatic flushers. In theory, you no longer need to press or touch anything to flush the toilets. You simply wave your hand over the sensor and the toilet lid automatically closes and flushes itself. I found this function to not work very well. It was just easier to press the damn flush button and then wash my hands afterwards. The aircraft also boasts a lower cabin pressurization system that enables passengers’ bodies to absorb more oxygen and thus, leave the plane feeling more refreshed. United Airlines economy class seats, row 27 on the B787 It should be noted that 27L is not the best seat in the house.  The same applies to 27A on the left side of the plane.  Because it’s an emergency exit row seat, the armrests do not fold up, windows are misaligned and the protrusion of the emergency exit door intrudes into your personal space.  If you have longer legs, you have to cant your legs to the side to avoid hitting the emergency exit door. There’s no space to store your personal belongings during takeoff/landing and people tend to congregate in this area while waiting for the bathrooms. However, you do get tons of extra legroom and you don’t have to bother your seatmate if you need to use the loo. All United Airlines economy class seats on the Boeing 787 are equipped with a 10.6 inch, AVOD (audio/video on demand), entertainment system located in the seatbacks with a selection of movies, music, games and a moving map.  In exit row and bulkhead seats, the monitors are located in the fixed armrests, further reducing seat width. I’m not that big of a guy but I could definitely tell the difference in width between ANA and United’s seat. USB ports are available for every seat but only two power ports are provided for every three seats. On most economy class seats on other airlines, your seat either reclines back or the seat pans move forward. On United Airlines’ 787s, the economy class seats recline back and the seat pan slides forward for a total of five inches of recline. Not bad. Once we reached cruising altitude and the seatbelt signs were turned off, the Flight Attendants came around to hand out drinks and pretzels. About five minutes after drinks were served, the Flight Attendants came around holding two trays and yelled out, “Chicken or pasta?”  That’s it. No menus, no description or further information.  When the lady next to me inquired about the dishes, her question was met with a very curt “C’mon lady, these are heavy. Chicken or pasta?” Not wanting the same attitude, I quickly chose the chicken when it was my turn.

I actually don’t know what sauce the chicken was in.  Teriyaki maybe? I wasn’t sure but it wasn’t bad. The chicken was served with a side of rice, salad, bread roll and a brownie. 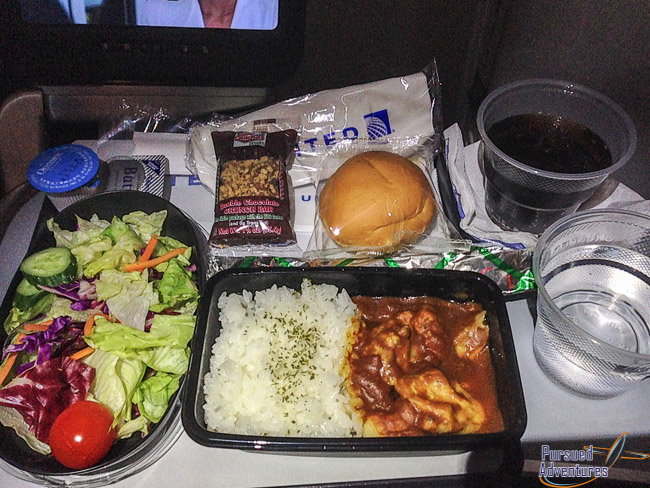 Dinner service aside, the Flight Attendants weren’t that bad.  They were not great by any means but this Houston based crew was young(er), nice(r) and better than your average United Airlines crew.

After dinner service, the cabin lights were dimmed and the Flight Attendants dimmed all the passenger windows so that those who wanted to sleep, could get some shut eye.  However, I wasn’t tired and was still pretty hungry so I wandered around looking for more food.  Snacks were provided in the galley in between meals but the selection was limited to tiny bags of pretzels. I loaded up on some water and several packets of pretzels. I then headed back to my seat to explore the IFE (in flight entertainment) system.

The IFE selection was actually pretty impressive. There was a huge selection of current and classic movies, television shows, documentaries and music. I ended up watching “The Wolverine” (not good), “Star Trek: Into Darkness” (really good) and then dozed off for a bit. Apparently, there was a mid-flight snack that I missed. Boo.

About an hour and a half before our descent into Los Angeles, a breakfast meal service was served. I ordered the omelette. It was served with a side of sausage, hash browns and a bread roll. It wasn’t terrible and I devoured the whole thing. After breakfast, the trays were cleared from our seats and we prepared for our arrival. The Flight Attendants came around the cabin handing out immigration forms for those that needed it. Because I have Global Entry, I didn’t need one. The landing was smooth and we taxied for a few minutes before arriving at terminal 7.

So now that I have taken a long haul flight on United Airlines economy class, I can honestly say that I still would not recommend it.  My flight was not horrible by any means but there are so many other airlines that provide a much better product for what you are paying.  The pros included a personal entertainment system with a fantastic selection of movies and USB connectivity at every seat. The cons included. . . everything else.  I’m sorry United.  I wanted to give  you a fair shake but you make it really hard for me to want to fly you anywhere. If you’re flying to Tokyo, I would recommend All Nippon Airways over United Airlines.  You can read my ANA review here.