Getting home from my jetBlue Mint experience proved a little challenging.  Though I found plenty of cheap flights to Los Angeles, all Sunday flights from Dallas priced out over $200.  That seemed a little steep, though I had one trump card to play.  I had an orphaned stash of about 20,000 Delta SkyMiles from years ago.  And Delta offered a nicely timed option to Dallas in Comfort+ for only 17,500 miles.  Since cash fares ran about $275, that seemed like a decent value.

I’ve also wanted to try Comfort+ to compare it to other domestic “premium economy” options.  The routing required a layover in Atlanta, but I could select a connection to Love Field on a 717.  I’ve long had an irrational obsession with the plane, making it a perfect choice.

Note: this post is part of my trip report series about my weekend trip to try jetBlue Mint.  Click here for the trip report index and introductory post.

Although I had access to The Lounge at BOS lounge through Priority Pass, with only about an hour and 40 minutes between flights and a landside terminal change, I went straight to the gate.  Our aircraft was already waiting for us at the gate. Boarding began right on schedule at 8:00, and I found it surprisingly orderly.  Comfort+ includes “SkyPriority” boarding.  Basically, this boards Comfort+ passengers in the same group as Platinum and Gold Medallion members.  I made it on in just a few minuter after boarding commenced, and made my way to my seat.

Speaking of the terminal change, keep in mind that only Terminals C and E are connected airside.  Connecting from C/E to Terminals A or B requires exiting and then re-clearing security.  Luckily, Logan provides covered walkways between all terminals, and I found the process pretty easy.  It took roughly 15 minutes to make it to Terminal A security.

Delta’s A321s feature 25 Comfort+ seats in a 3-3 configuration (the right side of the exit row only has 2 seats).  The seats are 18 inches wide, with 34 inches of pitch.  Also, Delta outfits all coach seats in blue leather, with the Delta Comfort+ logo on Comfort+ seats. I have to say, the patterned upholstery seems dated.  Kind of like the seats in my dad’s old 1981 Cadillac.  While perhaps stylish in 1981, it’s just a little out of date now.  Also, though Delta usually keeps its older fleet in good shape, these seats showed noticeable signs of wear. In addition, although providing the same pitch as American’s A321S aircraft, legroom seemed a little tighter.  Here was my seat in American’s Main Cabin Extra for comparison. Perhaps that’s because of American’s thinner seat design, or the more compact seatback pocket.  Regardless, it certainly beat standard coach, with 31 inches of pitch.  And though stingier with legroom, I found the seats more comfortable than American’s overall.  Better padding meant an easier time on the rear end and thighs. Each seat also includes a combo power and USB port on the lower right side of the seatback.  Though better than a port behind your legs, I still prefer American’s placement.  Plugging in a laptop can still result in a cord tangled in your feet if you’re not careful.  Also, while the USB is a nice touch, I probably don’t recommend charging your phone here.  At least not unless you have a really long cord.  This seems like an open invitation to accidentally stepping on your device when getting out. The good news is, you can find a more conveniently located USB port below the seatback TV screen. I made an egregious rookie mistake when selecting my seat, though.  I didn’t check SeatGuru.  And I ended up with the dreaded windowless window ahead of the exit row.  If you want a window seat in the A321, DON’T sit in Row 12.

Delta offers the same “Delta Studio” content I sampled on a First Class flight from New York last year.  Shorter domestic flights don’t offer much – about a half dozen movies and a few more TV shows.  On the A321, you can access content either through the seatback TV, or stream from your own device.  It’s better than nothing if you forgot to bring something from home.  Or you can state at the moving map and flight show. The A321 also comes equipped with GoGo WiFi.  I used my hour of free browsing courtesy of T-Mobile; speeds were predictably slow.  I tried sending a text message with a small (2MB) attachment, which never went through.  Much like my flight from New York, the WiFi stayed connected even after an hour.  This does seem like a Delta-specific glitch, though it’s not like I could actually do much given how slow the connection was.  NOTE:  Delta now offers free text messaging for all passengers, regardless of your carrier.

Delta Comfort+ positions itself above American’s Main Cabin Extra and United’s Economy Plus, and similar to Alaska’s Premium Class and Virgin America’s Main Cabin Select (soon to disappear).  In other words, passengers receive enhanced service in addition to extra legroom.  In Delta’s case, you receive free snacks, along with beer, wine, and cocktails.  The FA came through the cabin about half an hour after takeoff with a snack basket and to take drink orders.  I had no desire for a cocktail at 9 am.  So I just took a couple of snacks from the basket and asked for a cup of coffee. Overall, the snack offerings are similar to Alaska, but pale in comparison to Main Cabin Select, which offers a full menu of food items.  Nevertheless, it’s a nice improvement over regular coach.  On our 2 1/2 hour flight to Atlanta, the FAs made two passes with the drink cart and snack basket, which seemed adequate.

No proper window made it tough to sightsee.  I did get a decent picture of the Massachusetts coast as we departed Boston, though. Thanks to our early arrival, I had nearly 3 hours to kill before my connecting flight to Love Field.  I spent much of that time in The Club at ATL, Atlanta’s Priority Pass offering.  Things haven’t changed much since my last visit, so I won’t review it again.  Be aware that The Club is in Concourse F, at the far end of the airport.  I suggest using the Plane Train unless you fancy a long walk.  It took 15-20 minutes to trek back to Concourse C.

This portion of Concourse C is under renovation, making for a somewhat congested gate area.  And everyone seemed to be in a REALLY big hurry to get to Dallas, based on the crowd gathered near the boarding lane.  Boarding began a few minutes late, but proceeded quickly.  After a friendly greeting from the flight attendant, I found my seat, and we pushed back a little early.

B717 Seating, Interior, and In-Flight Entertainment

As you’d expect from a DC-9 variant, seating is in a 2-3 configuration in coach.  Comfort+ spreads over five rows, with 34 inches of pitch and 18.1 inches of width.  Seat design is identical to the A320.  However, despite its age, the cabin seemed better maintained than its A320 counterpart. Like the A320, even though seat pitch exactly matches Main Cabin Extra in American’s MD-80s, legroom felt noticeably tighter.  Still above average, but not as generous as I hoped. Delta does provide power outlets in the coach cabin, but there is a catch.  Plugs are shared between seats on the left side, and 2 per 3 seats on the right.  So, if you sit in a pair of two, you’re at the mercy of your seatmate to share the plug.  My seatmate already claimed the plug with a full-size Apple charger, and wouldn’t give it up the entire flight.  Which sucked, because that meant I couldn’t access the USB at the bottom, either.  (Good thing I didn’t need a charge.) Fortunately, this seat came equipped with a proper window.  So I stared at a Delta MD-88 next door for a few minutes. The 717 does not come equipped with seatback TVs, so all IFE is provided via streaming through Delta Studio.  If you plan on accessing the content, make sure to download the “GoGo Inflight” app before boarding.  I don’t recommend relying on GoGo to provide enough juice once airborne.  Speaking of which, I tried using my hour of WiFi again, but speeds once again proved unusably slow.  In this case, GoGo probably did me a favor.  I used the time to catch up on a little sleep instead.

Shortly after take-off, flight attendants provided a snack and beverage service.  This time, with a short flight on tap, only Biscoff or pretzels were offered.  I did decide to take advantage of a free cocktail, though.  Below is the drinks menu offered in Comfort+.  Though the menu lists prices, all alcoholic beverages in Comfort+ are complimentary. I decided to try the “Sliver Horizon” to compare it to jetBlue’s signature drink.  Amusingly, neither of the flight attendants seemed to know what it was.  After showing them the menu card, one of them handed me a cup of Fresca and a tequila bottle to mix to my taste.  Fair enough. 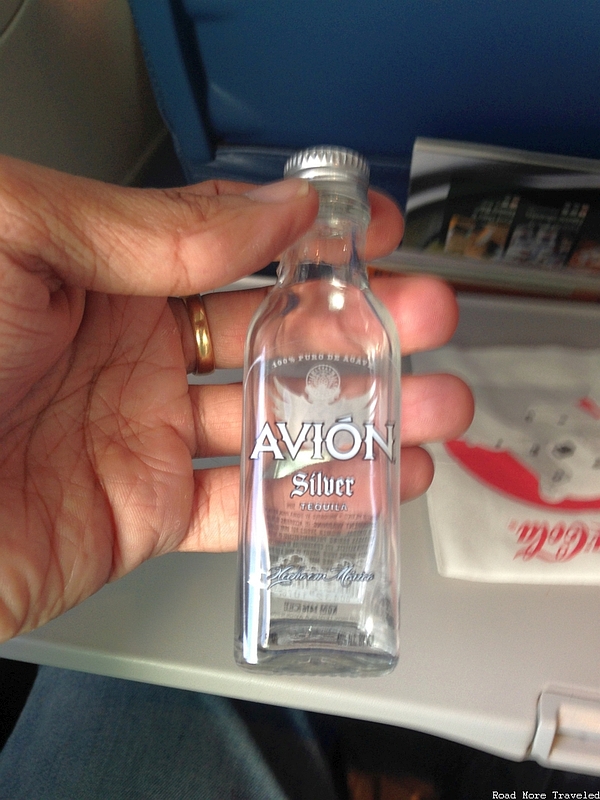 With my drink mixed up, time for the obligatory drink selfie. I haven’t had Fresca in ages, but it complemented the tequila fairly well.  Bitter soda and a salty liquor make for a decent combo.  The bitterness does remain, though, so if that’s not your thing, you probably won’t like it.  I marginally preferred the Silver Horizon to the RefreshMint, mainly because I’m not a fan of mint.

The FAs did offer another round of beverages and Biscoff, but I was ready for a nap, so I passed.

I slept for a good portion of the middle of the flight, but got a few decent photos at the beginning and end.  We initially took off to the east from ATL before looking back around, providing a great view of the Atlanta skyline. 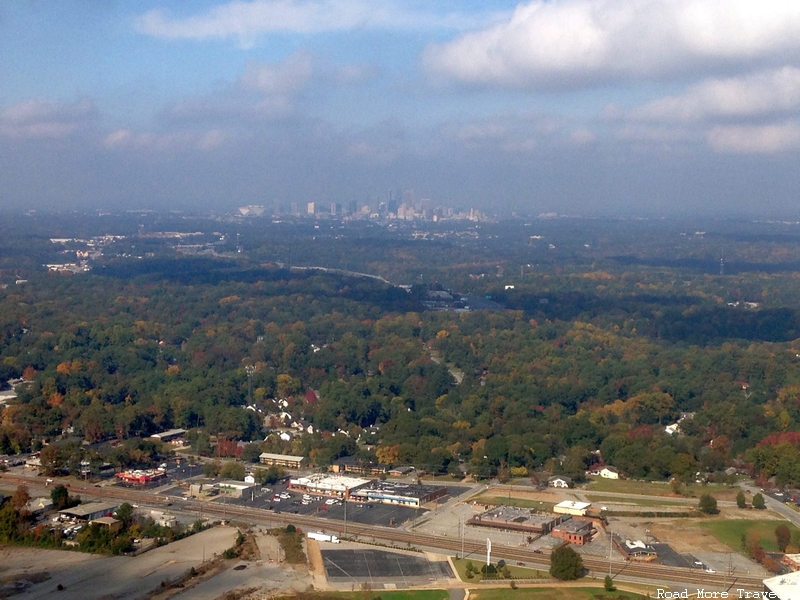 Scattered low clouds created a neat illusion a couple minutes later, as a puffy cloud appeared to eat the skyline. Later, as we approached Dallas, strong southerly winds meant first going around the city to approach the airfield from the northwest.  We had a very nice view of the both the Dallas skyline and Love Field to the southeast. 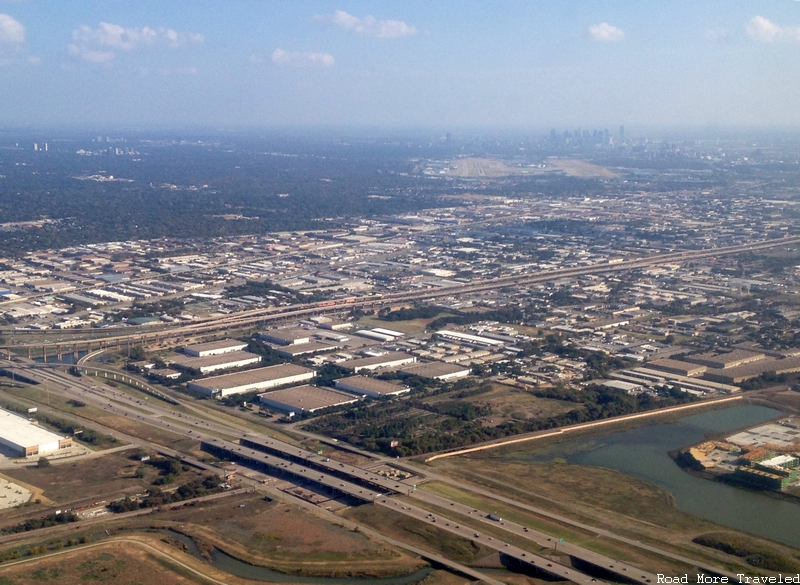 I also snapped a quick picture of our ride after landing.  I know it’s just a fancy Mad Dog, but I’m still obsessed with this plane for some reason. 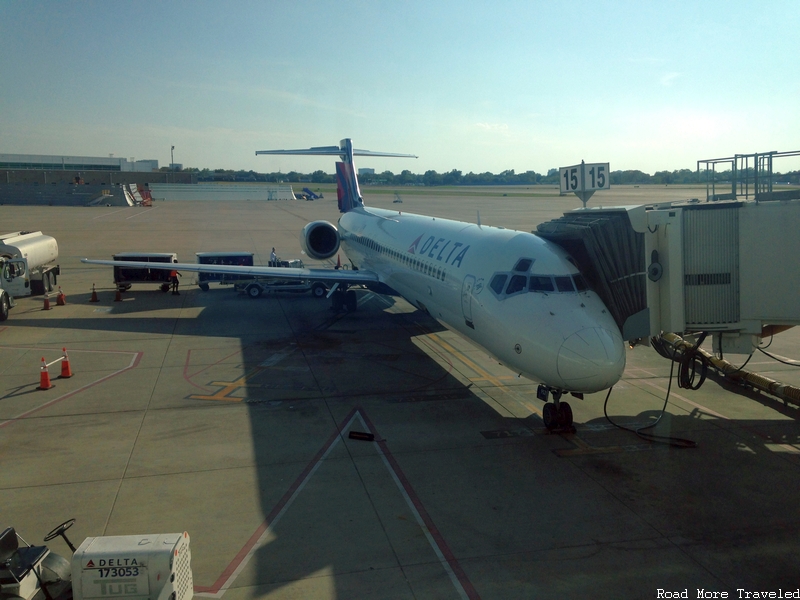 While I commend Delta for trying to provide a more “upmarket” extra legroom product, is it worth the upcharge?  Sample prices (over regular Economy) from Dallas include $29 to Atlanta, $44 to Los Angeles or New York, and $64 to Seattle.  That’s roughly equal to what American charges for Main Cabin Extra on the same routes.  I do find Delta’s on-board service a little better than American or United.  But overall space isn’t as generous, so really, the value is in the free snacks and booze.  If you plan to drink a lot, you can get outsized value, I guess.  But all else equal, I think I’d rather have more space over a cocktail. (If Alaska is a viable option in your market, Premium Class beats Comfort+, as you get both the space AND the cocktail.)

Based on these two flights, it seems most Delta flyers feel the same way.  Many Comfort+ seats seemed to be filled with upgraded Medallions who missed out on First Class upgrades.