This trip was primarily intended to go Spain, but I was happy to explore some new places even for a short stay.  We ended up book ending this trip with some short overnights in some major capitals, Zurich, Madrid and now Vienna. The sitting room in our Executive Suite at Le Meridien Vienna

We opted for a cash and points booking at Le Meridien Vienna.  As a category 5 property, it cost 6000 points plus $110.  That seemed the best deal compared with using points, or paying cash straight up.  A Suite Night Award request was successful, and we were given a 2 category upgrade into an Executive Suite.  The room was quite nice, unfortunately we would only be staying for about 18 hours.

The public areas of the hotel are filled with art, as is typical of Le Meridien properties.  This hotel seems to be almost W-like in its modern design.  The lobby is a bit over the top with its displays, including a full-sized mannequin seated on one of the couches.  Below is an example more tame piece in the lobby.  The art displays do change, and are primarily by local artists.

From Vienna Airport to Le Meridien

After arriving from the airport, we took the CAT (City-Airport Train) into the city, then a subway. From there, it was about 2 minutes walking to the hotel.  It took maybe 30 minutes from the airport.  Nice and easy, despite having to transfer.

Upon checking in, the agent told us we had a very nice room and it was too bad our stay was so short.  How correct she proved to be.  We took the elevator up to our floor and found our large suite on the corner of the building facing the front of the hotel on Opernring.  The room itself was quite large.  At checkin we learned that the contents of the minibar were free, while it was not fully stocked, it  was a nice touch.   Still and sparking water, soda, juice and beer were all included. The room itself was very nice, there was a small closet near the entry door, with the minibar and then a desk with various art around the large corner room.  Design was fresh and modern.   It was truly a suite, with separate rooms that could be closed off. 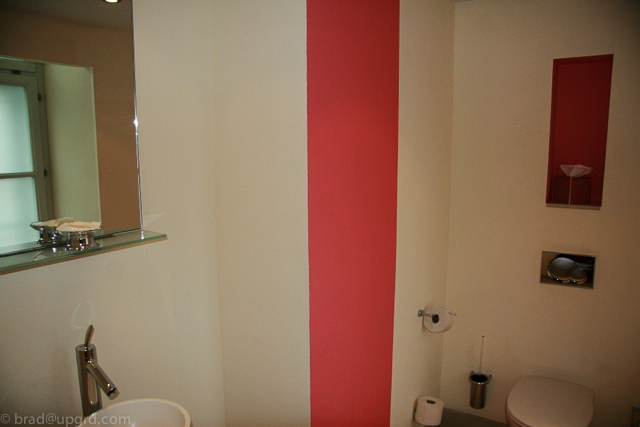 The bedroom could be closed off from the rest of the room. As nice as our room was, the point of our visit to Vienna was not staying at the Le Meridien.  We dropped our bags off in the room, then went out to explore a bit.  It wasn’t sunny, but the temperatures were relatively warm on this late fall day.   I’m a bit of a history buff, and of course Vienna is full of places to see, and our short visit would barely do it justice, but we tried to maximize our time.  One reason we chose the Le Meridien was the easy access to various nearby sites.  A very quick walk led us to the Burggarten, essentially across the street from our hotel. Above photos from the Burggarten, Vienna Michalerplatz, near enterance to the Hofburg. We visited some of the museums at the Hofburg, and learned a little bit about fascinating history of the Habsburg Dynasty.  Touring the Imperial Apartments was pretty amazing.  Definitely recommended if you have any interest in this period of history.

I was training for a marathon at the time, and I needed to do one more long run, so I got up early the next day to put in some miles and ventured out into Vienna.  A week of eating tapas and drinking wine wasn’t the best way to prepare for a marathon, but I certainly enjoyed myself on this trip.  This also allowed me to see a bit more of Vienna.  The only problem with the early morning run was some heckling by young men returning home from bars… Some rather entertaining graffiti

We really enjoyed our brief visit to Vienna.  I’d definitely like to return and spend more time seeing more of this very interesting city.  Its really a crossroads of Europe, very close to borders with Slovakia and Hungary.  The Le Meridien was a great spot, and I’d return there in future trips to Vienna.