Good news for Alaska Airlines fliers as they just opened up a brand new Board Room in the N satellite concourse at Seattle-Tacoma Airport (SEA). When I flew this flight in October of 2015, the lounge wasn’t open yet so I couldn’t visit it but from what I hear, it’s nice. Those departing from the N gates don’t have to make the 10 minute trek to/from the Board Room located in the main terminal anymore. This trip was purchased in economy class and upgraded to first class using one of MVP Gold upgrade certificates and my lounge access to the Alaska Airlines Board Room was from my Priority Pass lounge card.

About 10 minutes prior to boarding time, I left the main terminal Board Room and made my way over to gate N14. The flight was delayed for a bit so I snapped some pictures of the bird, took a seat and waited for boarding to be called. Boarding then started a few minutes late with first class passengers and MVP Elites, followed by everyone else. All passengers boarded the aircraft through door 1L. I was seated in seat 2F, a window seat on the right side of the plane. 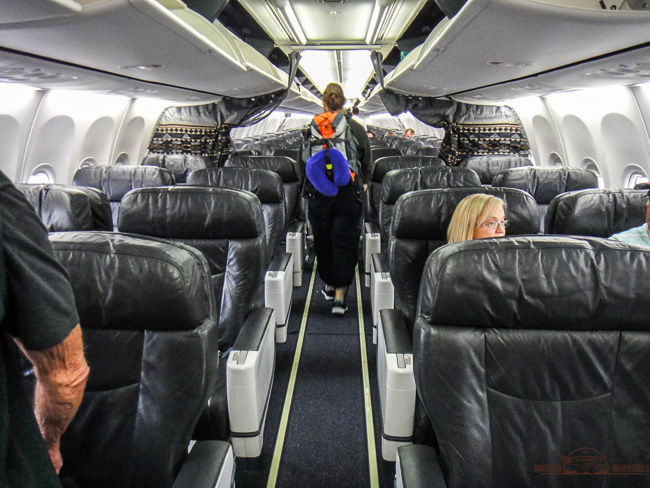 This brand new Boeing 737-900 is equipped with Boeing’s new Sky Interior and slim-line Recaro seats. There are four rows of first class seats in a 2 X 2 layout. The recliner seats offer 21 inches of width and 36 inches of pitch. I found the seats to be quite comfortable as they provided plenty of padding for your rear-end. There is a wide armrest to separate the two seats and a small slide out tray for drinks. The seats have a pretty good amount of recline but are still domestic recliner seats so don’t expect anything too crazy.

The overhead bins are larger than the overhead bins found on similar narrow-body aircraft and can accommodate larger roll-aboards. Carry-on items can be stored under the seat in front of you and the seatback pockets can hold your laptops, cell phones and other small personal items. If you are seated in the bulkhead seats in row 1, you will get extra legroom but will lose the extra storage spaces in front of you. At the seats, there are a three overhead reading lamps, three air vents, two USB ports and two universal electrical outlets for every two seats. Gogo inflight internet is provided on this flight for a fee but live-streaming Alaska Beyond entertainment can be viewed on your personal electronic devices for free. There is one lavatory located in the front for first class passengers. It’s a standard size lavatory with no additional amenities. Small bottles of water were waiting for each passenger at their seats. On this flight, the entire first class cabin was full. As I settled into my seat, the flight attendant came by to offer me a Hawaiian mimosa, pre-departure beverage from a tray. It’s basically champagne with POG (pineapple/orange/guava) juice. Another flight attendant then came by to hand out menu cards. After all the passengers were seated, the first class flight attendant introduced herself and informed everyone regarding the details of our flight. She then came around to take our meal/drink orders.

We pushed back from the gates a few minutes late, made our way to the runway and then departed for our 5 hour and 40 min journey to Honolulu. There was actually a good selection of 24 new Hollywood movies such as Mad Max, Spy, Inside Out and Hot Pursuit; episodes of TV shows such as Big Bang Theory, Fargo and Sleepy Hollow; games; and magazines such as Conde Nast Traveler and Wired. There’s enough entertainment on that little thing to keep anyone entertained for even the longest of Alaska’s flights.

The tablets themselves aren’t very large. They are about the size of an iPad mini but they totally do the trick in keeping you entertained. They do have a little stand but unfortunately need a flat surface for viewing. During the meal service, it was a little tricky to have both the digital player and the meal tray on the tray table at the same time. If Alaska can figure out a way to mount these players on the seatback in front of you, that would be perfect. As for battery life, my little guy lasted me the entire six hours to Honolulu just fine.

Our meal service started with a pre-meal drink and a warm ramekin of mixed nuts. Once I was finished, my salad plate was taken away and my main meal was brought out. I went with the mango braised beef short rib and it was delicious. I know it doesn’t photograph well but the short rib was tender and flavorful and the vegetables were cooked perfectly. This was then followed by a ginger Lilikoi crème brulee. It was by far one of the best desserts I have ever had on a plane. The crème brulee was thick and creamy and had a very subtle ginger aftertaste to it. Served with some blueberries and raspberries, the dessert was the perfect palette cleanser and end to a great meal. After dinner, I settled in for a movie. I watched American Sniper and finally saw that fake baby scene that everyone was talking about. Good movie but how ridiculous was that??

Midway through the flight, the flight attendant brought out a snack basket with fruit, chips and other snacks. And then mai tais were served just prior to arrival to put us in the aloha spirit. Instead of doing a separate review, I’ll just add some comments about the return flight here. The flight was on another Boeing 737-900 so the seats and setup were the same as the outbound. On the way back, the digital entertainment players had an updated movie selection including newly released titles such as Jurassic World and Ant Man. On this morning flight, I went with the mushroom omelet with bacon and asparagus/potatoes for breakfast. It was served with a side of fruit and a muffin. With some tailwinds, we made it back to Seattle in record time. . .  4 hours and 42 mins. I don’t think I have ever flown back from Hawaii that quickly before (dare I say, it was too quick?). Being from Oregon, I love flying into Seattle and seeing these amazing chain of volcanos. I think that’s Mt. Adams, Mt. St. Helens and Mt. Hood (from left to right). Overall, I really enjoyed my first class flight on Alaska Airlines. They don’t offer lie-flat seats or any other premium cabin amenities but what they do offer are fantastic employees that genuinely care about taking care of you. Of all my flights on Alaska, I have never experienced bad customer service (or even mediocre service, for that matter) and this flight was no different. Our flight attendant, “SJ,” was perfect. She was attentive, friendly and proactive in refilling drinks and clearing out plates. Because it was my first time visiting Honolulu, she even took the time to write out some local restaurant recommendations and attractions for me to visit.

I thoroughly enjoyed my flight and I would highly recommend Alaska Airlines first class (and economy, for that matter) to everyone. But then again, I’m an Alaska Airlines fanboy so take this for what it’s worth. That being said, I must admit that one of Alaska’s negatives is their limited route network. Unless you live in Seattle, their routes are fairly limited and you will most likely have to connect in either Seattle or Portland to get anywhere else. However, both Seattle and Portland are easy airports to transit through and if you have a Priority Pass membership, you can gain access to the Alaska Airlines Board Rooms to rest and relax before your flight.

This review is part of my trip to Hawaii. The other reviews in this series are: