This post isn’t about aspirational travel, but a fun day I spent with my son in the cheap seats. Last month, I planned a quick day trip to Chicago to do a United Airlines Economy Class review on the 737-MAX 9. Really, for no other reason than to check another aircraft of my list. Originally, I planned this trip for December 13th. But severe weather in the Dallas area that morning derailed that plan.

So I decided to try again in a week – and it occurred to me that my son would be on school break. He’s started asking about daddy’s “field trips” where I take crazy review trips by myself. Rather than do this one myself, I asked Ashok if he wanted to join me. He excitedly said yes, and so we made plans for our first avgeek father and son day. And, you might say, an introduction to my crazy review trips.

A Day Almost Foiled Before It Started

This trip sort of got foiled before it even started. I mentioned I planned this specifically to review United’s 737-MAX 9. But less than 24 hours before departure, I received notification from Flighty of an equipment swap to a 737-900ER. Well that sure stinks. My son’s too young to appreciate canceling a trip because of an equipment swap, and besides, he was beyond excited at that point. So I decided to roll with it and enjoy our day together anyway.

Kicking Off Our Avgeek Father And Son Day

Unlike the previous Tuesday, this morning started cool but sunny. We made it to the airport around 9:15 for our 10:49 departure, and headed to the Capital One Lounge. For the flight, I picked up a sandwich for me, and some milk and a yogurt parfait for Ashok. Meanwhile, we had just enough time for a cup of coffee and some planespotting. Ashok enjoys the big windows looking out over the Terminal D ramp area. (You can also see his tiger carry-on, which he brings with him on every trip.) As we watched, a very nice Qatar Airways 777 rolled by on its way to the gate. My son, though, was more interested in the trucks and tractors running around on the ramp. I’ll have to talk to him about priorities… Soon after, we headed back to the Skylink to go back to Terminal E with boarding approaching. On the way, we passed a trio of 777s, two from Qatar Airways, and another from Emirates. Our flight to Chicago, United 2004, boarded on time, and we headed onboard in Group 3. The cheap seats on the 737-900 aren’t particularly exciting one way or another. Seats are 17.3″ wide with 31 inches of pitch in most seats. With a fair amount of junk shoved under my seat, it did feel pretty tight. The little guy had enough room for his legs and feet, though. United has multiple versions of the 737-900 in its fleet. This one had 117 standard and 42 Economy Plus seats, all in a 3-3 format. Economy seats looked fairly recently refurbished, with United’s signature blue leather interior. I almost forgot, we posed for a quick selfie before getting going. These planes have no in-seat IFE, but they do at least have power outlets, with two for every set of three seats. These rank as my least favorite location for a plug. It’s hard to find the socket, and cords tend to get stuck in feet. I brought my laptop so Ashok could watch videos, but he had no interest in that. Instead, he wanted to play card games the entire way. So I never had to deal with the tangled cord thing. On the other hand, playing cards on two tray tables takes some slick contortion skills…

My son always commandeers the window seat when we fly. This time, though, a filthy window made it difficult to see out. Nevertheless, he enjoyed staring out just the same. Especially as we passed some snow-covered  ground over central Illinois. Service on board the flight was, again, nothing particularly noteworthy. For the record, on a short domestic flight, I regard that as a good thing. I enjoyed a stroopwafel, my son some pretzels, we both ate our to go bags from the lounge, and we shared a soda. Well, technically, we ordered our own, but the FA was nice enough to hand us both full cans. The whole can is too much for Ashok, so I shared his and took my can with me.

The aforementioned dirty window made it hard to flightsee, but I did manage a few decent photos. First, as we taxied to the runway, we spotted the old Flying Banana at Terminal E. Then, as we headed to the C gates at O’Hare, I spotted this nice United 757-300 that landed right behind us. This plane certainly caught my son’s eye. As an added bonus, we arrived 10 minutes early. This United Airlines economy class review was off to a good start!

And that’s where the “fun” began. As we parked at the gate, Flighty sent me a notification of a tail number change for our return flight. Originally, our A319 was coming from Colorado Springs, and left on time. But United changed it to a plane coming in from…Vancouver. You remember what happened in Vancouver on December 20th? That’s right, the snowstorm that nearly basically shut down the airport. The plane, already more than 4 hours late leaving the gate, wouldn’t arrive until 45 minutes after our scheduled departure. And sure enough, Flighty soon sent an alert of a 90 minute delay for our flight. It also seemed pretty clear that plane was stuck on the taxiway and not moving.  Lovely…

Anyway, nothing we can do about that, so Ashok and I went to find some food. He wanted pizza, so I took him to Reggio’s in the C Gates food court. The food court was packed, so we walked a little and found and empty gate area to sit down. It’s lousy pizza, but he enjoyed a slice, which is what matters. After lunch, he REALLY wanted to explore the tunnel to the B gates, so I obliged. That plane stuck in the snow in Vancouver finally took off after 2 hours on the taxiway, which meant a nearly 4 hour delay for our flight home. (I did look into alternative flights. Unfortunately, in the peak of the Christmas season, nothing turned up.) At the time, my son was on a playing cards kick, so we spent most of our extended layover playing card games. With occasional breaks for climbing on the sofas while moving around to empty gate areas, of course. 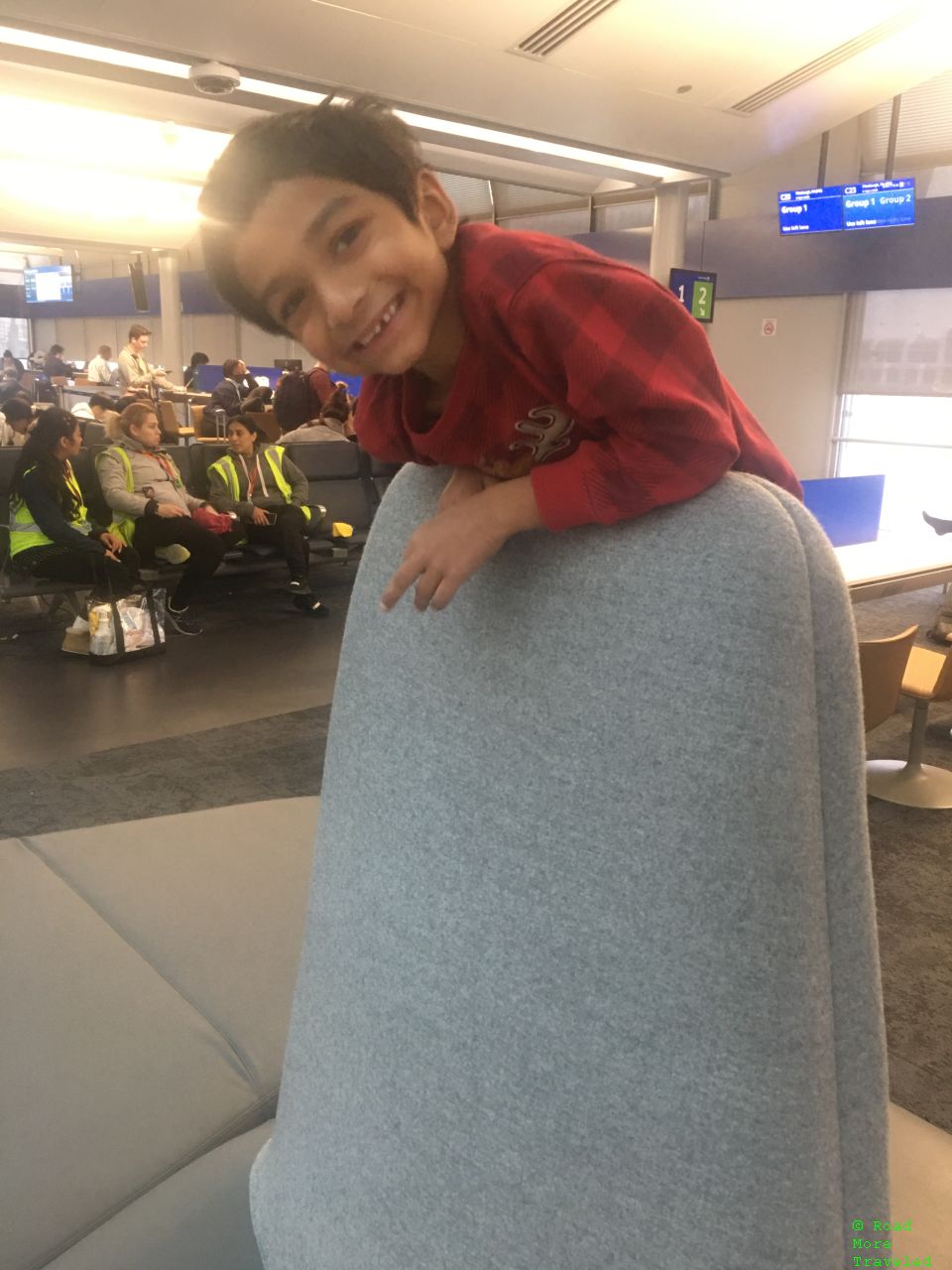 Finally, our 2-hour layover turned into 6 came to an end. Our flight home was ready to board!

This plane was a real “ghetto bird” as my friend Matthew at Live and Let’s Fly would say. Not only did this plane not have any in-flight entertainment, it had no power ports in deep coach, either. The faded writing at the bottom of the seatback shows this plane’s age, too. At least legroom felt a little better than on the 737, despite only 30″ of pitch. The seat itself at least looked recently refreshed. Oddly, I flew on an United A319 to Newark last April – and that plane had power ports in standard Economy. United is slowly refurbishing its A319s to increase the First Class cabin from 8 to 12 seats, and as part of that re-do, deep coach apparently gets power ports, too. Anyway, below are a few photos from that April flight, showing the Economy cabin in its 3-3 configuration. For A319s with in-seat power, the outlets are below the armrests on the seatback in front. These are much easier to reach than the underseat outlets on the 737-900. 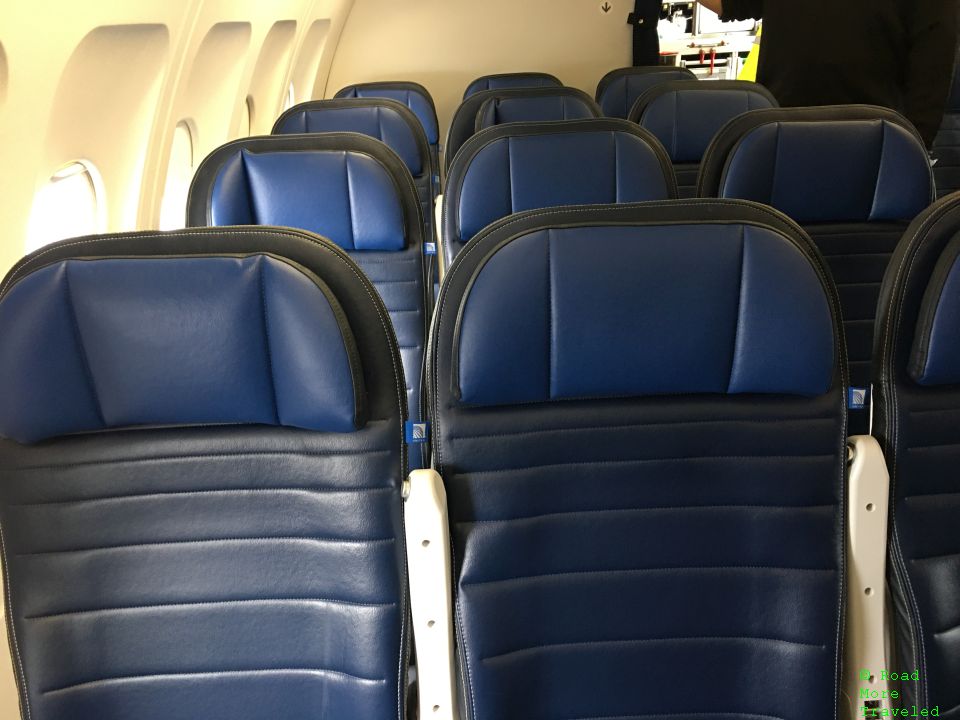 This return flight proved equally uneventful once underway. No stroopwafels on this flight, but Ashok and I enjoyed a package of Biscoff. And we played more card games, somehow managing not to lose a single one underneath the seats. There was no flightseeing on this leg, with the entire trip occurring after dark. Oh, the Biscoff provided the oomph needed to finally jar my son’s loose tooth out. That made his first flight with just dad all the more memorable for him.

We finally made it back home WAY past Ashok’s bedtime. But with no school the next day, and a visit from the tooth fairy forthcoming, he didn’t mind at all.

You know the best part of this father-son day? I didn’t spend a single minute doing anything work related, something I haven’t done in a very long time. We literally used the entire day to spend quality time together. And that’s making me look forward to finding another vacation day to do this again.

Oh, yeah, about those final thoughts on the actual United Airlines economy class review. The plane swap and subsequent delay were annoying, but otherwise, this was perfectly reasonable for domestic coach. I mean, what more do you need than a stroopwafel for breakfast?