Compared to a slow 2017, I had a much busier 2018.  From walking tours to First Class, I’ve put together some highlights of my 2018.  I’ll then preview some ideas for 2019, some already planned, others on the drawing board.

A Surprisingly Large Amount of Flying

It didn’t hit me until I put this into the GC Mapper, but I did a fair amount of flying in 2018. That added up to a total of 42,251 miles.  If only I believed in loyalty to one program, right? 🙂 Of course, some of these were award flights, and I used my free agency to try a variety of products.  I also added two new airports to my collection – Brussels and Stockholm Bromma.  As for my favorite trip of the year, that goes to my Air France La Première adventure in April. I loved the 777-300ER cabin in particular, but I also enjoyed a spectacular meal in the Paris La Première lounge. Meanwhile, I added a new airline to the list on that trip with Joon, Air France’s “airline for milennials”.  Joon was…fine, though I failed to see what made it particularly “milennial”. My First Stay at a Waldorf Astoria Hotel

My wife chose a trip to New Orleans for her birthday in March.  I decided to surprise her with a splurge hotel stay at The Roosevelt New Orleans.  My first stay at a Waldorf Astoria didn’t disappoint, with beautiful common areas and excellent service.  The manager also surprised us with an upgrade to a suite, and a birthday gift for my wife. 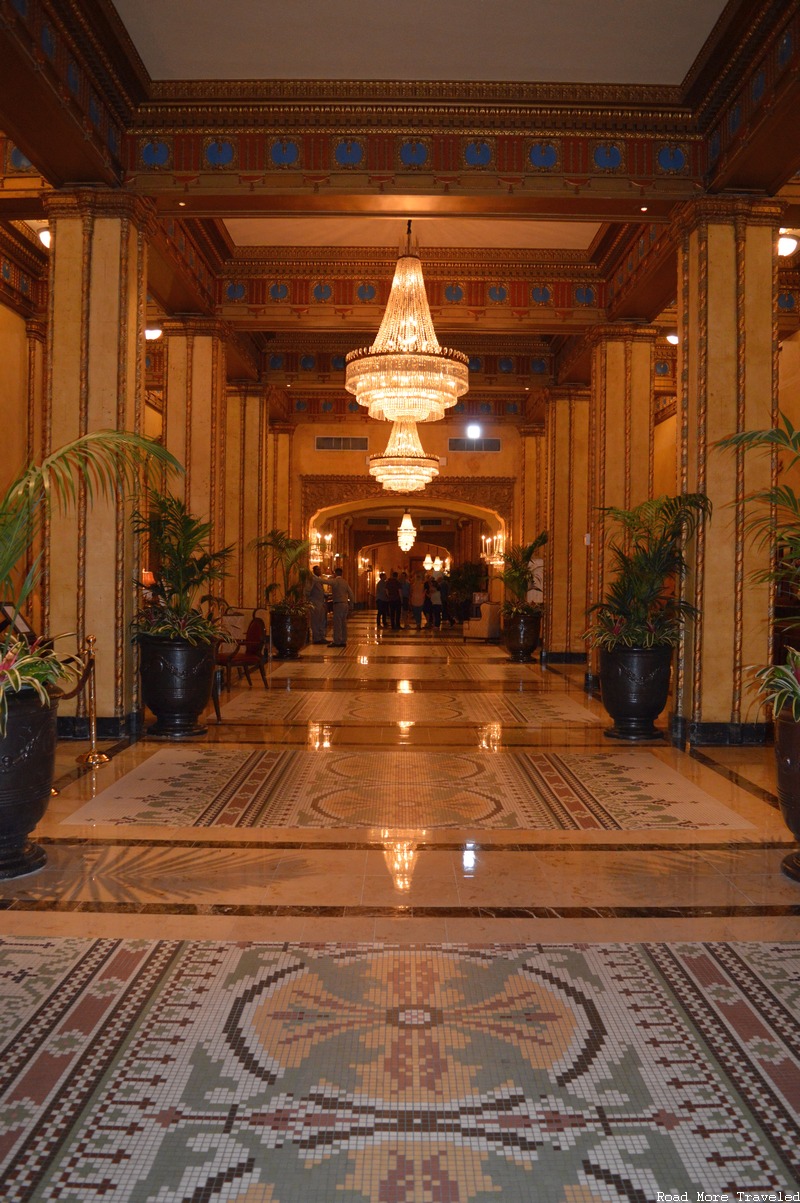 We took our last true cross country road trip in 2014, a drive to Boston to catch a cruise.  That changed this June, when we hit the road for New York City.  We of course enjoyed our time in the city, the primary destination on our trip. But the great thing about road trips is the freedom to see other things along the way.  On this 3,000+ mile jaunt, that brought us to Shenandoah National Park, the Flight 93 Memorial, and Cuyahoga Valley National Park.

We started off with a few days in one of my favorite American cities, New Orleans.  Besides the usual French Quarter tour, we also visited Destrehan Plantation, a few miles outside the city. Later, during my La Première adventure, I spent a wonderful day walking around Barcelona. Then, on my A350 trip in August, I spent some time in Antwerp, Belgium in search of chocolate and beer.  I found both, and discovered a great city for spending a Sunday morning. Later that day, I spent the evening in Amsterdam mostly…eating. My last trip in November, meanwhile, brought me to Brussels and Stockholm for a partial day in each.  I’ll have more in my trip report, but suffice to say, both impressed me.

With the 2018 highlights out of the way, here’s what I’ve currently got in the pipeline for 2019.

A Preview of the New LAX United Polaris Lounge

United recently released a limited number of “preview” tickets for the new Polaris Lounge at LAX.  Though the lounge opens January 12th, lucky guests could purchase a pass for 2,500 Mileage Plus points for a sneak preview the day before.  I have a day trip to Los Angeles booked to check it out.  Hopefully the a la carte breakfast justifies the 6 am flight to make it there on time…

Delta launches its brand new Airbus A220 aircraft on January 31st, and I’ll be on one of the first flights.  Technically, Dallas to Boston launches A220 service, but my flight to New York departs soon thereafter.  The A220 sure looks like a solid aircraft, especially in the back of the bus.

On the return, though, I expect a much..ahem…lesser experience aboard American’s 737-MAX8 in deep coach.  Why?  I take one for the team and report about it, so you don’t have to.

Last year, Lufthansa briefly released numerous First Class saver awards to partner programs.  I pounced on that to use 87,000 Avianca LifeMiles to book a one-way from Frankfurt to Washington Dulles.  For one, I want to fly as many 747 products as I can before the plane disappears, and FRA-IAD still features the 747.  But more than that, Lufthansa offers its famous rubber duck at the Frankfurt First Class Terminal.  And I must get one for my son.

From London, I’ll take a short hop on Lufthansa Economy Class to Frankfurt.  I haven’t decided what I want to do in Frankfurt, but I do have one activity planned out already.  I managed to find decent rental car rates, so I rented an Audi S5 to try out the Autobahn.  It looks like there’s a lengthy stretch of derestricted (no speed limit) autobahn south of Frankfurt.  Hopefully the early March weather cooperates.

Returning to Tokyo In Style

My wife and I visited Japan in November, 2015.  You remember, that time I flew to Japan because I wanted Kobe steak for my birthday.  Well, some points and miles news convinced me to return next summer.  You may recall that Chase dropped Korean Air Skypass as a transfer partner.  I figured I might not have another chance to try Korean Air First Class, so I planned a trip around that.  Just 80,000 Skypass miles bought me one First Class ticket from Atlanta to Seoul on the 747-8.

From Tokyo, I faced many choices to return home.  Eventually, I settled on ANA First Class to Los Angeles.  For this segment, I redeemed 90,000 Avianca LifeMiles using a cash plus points redemption.  I’m flying in July, so hopefully I won’t face the weather hijinks suffered by Brad.

Ideas Still On the Drawing Board

These four trips promise to provide plenty of adventure, but I still have a few other items on the drawing board.  One or two of these might happen, though most probably get punted to 2020.

A year isn’t a year in our household without a legit road trip.  For 2019, I’ve narrowed it down to two possibilities.  One is to an area I haven’t explored much of, the Upper Midwest.  Specifically, the upper reaches of the Mississippi River, including the headwaters in Minnesota.  Another possibility – a trip to California to help my mom drop some stuff off at my sister’s place.  I might use that opportunity to knock a few more National Parks off the list, perhaps Saguaro National Park in Arizona.  I’ve been fascinated by the giant cacti since I saw Snoopy’s brother Spike walking through them years ago.

This one almost certainly gets punted to 2020.  But both my wife and I want to take Ashok on another cruise.  I’m deferring a decision until we see how he does on a plane in March.  If he does better than last time, that gives us a much larger group of cruises to choose from.  That might also push us to wait a year to save up for one that leaves farther from home.

This one appeared on my 2018 wish list, but other stuff took all my vacation time (and budget).  I’d like to try again in 2019, but when is the big question.  Maybe right after tax season ends in October.  The other problem is cost.  American almost never releases saver award space in First.  And neither my wife nor I have enough AAdvantage miles remaining to book an anytime award.  Meanwhile, cash fares generally run $1,000-1,300 to fly DFW-LAX-JFK-DFW, with the transcon in First.  Maybe I’ll get enough clicks this year to pay for it…

I’ve read numerous complaints out there about the lack of Premium Economy reviews in the blogosphere.  Though I plan one for Air New Zealand, I’d love to review more products.  United’s new Premium Plus just might provide a good opportunity.

Trouble is, if I do this, I really want to review two different PE products.  Piecing together a round trip without breaking the bank proves challenging.  And forget about mileage redemptions.  Not all airlines offer them for PE, and those that do generally charge uncompetitive rates.  Inevitably, we’ll see fare sales at some point, which might provide some inspiration.

I suspect this one also gets punted to 2020, though.  Perhaps by later in that year, we might be ready to take Ashok to Europe, and I can book PE for everyone for a little extra space.

Thank You For Your Readership

Most of all, I want to say thank you to everyone for your readership.  I hope you enjoyed 2018’s content, and I look forward to sharing many more adventures in 2019!