My amazing Thai Airways A380 flight from Bangkok sadly ended too soon and we arrived at our gate in terminal one slightly ahead of schedule. I had a six-hour layover in Paris before connecting to Montreal on Air Canada and decided to check out the airport lounges before walking over to my flight. After a long walk through the terminal, I followed the signs for “Airport Lounges” and found my way to the Star Alliance Lounge at CDG. 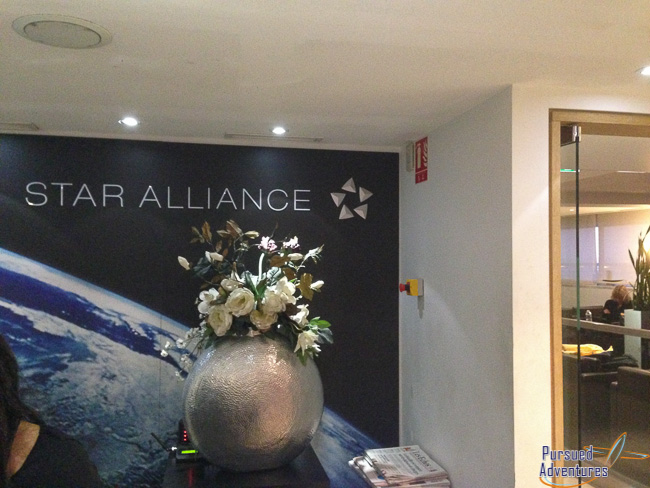 I didn’t have my boarding passes for Air Canada yet so I presented my passport and itinerary for the agent to look up. The very friendly agent was able to look up my itinerary and allowed me into the lounge.  She also warned me my connecting flight departed from terminal two and that it would take me approximately two to three hours to get there.  And she was not kidding.  It literally took me two hours to transfer terminals but I’ll talk more about that later.

Those flying in premium cabins on Star Alliance flights or holding Star Alliance Gold cards are granted entry into the Star Alliance lounge. The lounge is actually under renovation at the moment so if you are visiting anytime soon, don’t expect much. And if you’re nowhere near here, I wouldn’t make the trip just to visit this lounge. The temporary lounge is puny and amenities such as showers and rest areas are unavailable. Bathrooms are located outside of the lounge by the elevators.

If I had to estimate, the lounge space is approximately 1700 square feet.  There’s limited seating and at the time of my visit (7:00 AM), the place was packed! I wasn’t able to find any seating in the main area and was lucky enough to locate an empty chair at one of the two open work stations.  Electrical power ports were available at some of the seats but those were all taken.

The Wi-Fi was decent and I was able to get some work done.  As far as food goes, there was a small selection of cold dishes including sandwiches and cold deli meats and hot foods items including a soup, pastries and finger foods.  There was also a small self-serve bar area with a mediocre selection of spirits, beers and wine.  Like I said, don’t expect much.

They do not make any boarding or gate announcements so you have to watch the time boards for updated gate information. As you can see from the pictures, it’s really not much. Like I said before, if you’re not departing from terminal one, I don’t recommend you making the trek over here.  It’s nothing special and Paris – CDG is a horrible airport to navigate.  Let me give you an example. So I arrived in terminal one and had to depart from terminal two.  Seems pretty simple, right? Just walk over to the next terminal? Wrong.

10 minutes of walking later, I found the signs for “Terminal 2 and 3” and then followed those.  Finally getting to a glass door with the sign pointing for Terminals 2 and 3, I walked through it to find myself outside of the arrivals area! Thinking I was an idiot and made a wrong turn, I walked around and found signs for Terminals 2 and 3.  Turned out, I wasn’t an idiot and I was supposed to leave the secure area and find your way to the CDGVAL train to take you the other terminals.

The CDGVAL is the train the takes you to the parking garages and other terminals.  They call it the “Shuttle Bus” but it’s really a train.  Don’t look for a bus on a roadway like I originally thought. Once I arrived at terminal two, I had to find my way to the Air Canada counters and checked in. Now with my boarding passes in hand, I had to go through passport control and security check again. Luckily, as a business class passenger, I received an expedited pass for passport control and security.  And after that, it took me another 15 minutes just to get to my gate.  So as you can see, the whole process took me about two hours just to connect from terminal one to terminal two, and that’s with expedited screening and passport control. Without the expedited screening, I would add on at least another 30 to 45 minutes to that. So my final thoughts on transiting through CDG- just don’t. But if you must, make sure to allow for extra time to transfer through one terminal to another. And if you were thinking of visiting the Star Alliance lounge from another terminal – you’ve been warned.